Which one of the following codons codes for the same information as UGG?
A. UGU
B. UGA
C. UAG
D. UGG

Verified
91.8k+ views
Hint:Codons are the genetic codes consisting of three base pairs. Thus, they are called triplet codons. These are the amino acid translating units of the genetic material. The translation machinery reads a codon specific to an amino acid and translates the codon sequence to make proteins. UGG codes for tryptophan. Except for tryptophan and methionine, all other amino acids are coded by several codons.

Complete answer:The genetic code lying inside the nucleus of the cells is a sequence of nucleotides in the form of DNA or Deoxyribonucleic acid. The sequence holds the codes that determine the amino acid sequence of proteins. The information contained in DNA is needed to go through a series of steps that occur for the formation of proteins. These steps are transcription and translation. In transcription, an mRNA transcript is made which holds the information for protein synthesis. This sequence consists of codons. Codons are useful sequences of DNA made of three nucleotide base pairs that can code for particular amino acids. Our body is capable of producing 20 amino acids. For these 20 amino acids, 64 codons are present. 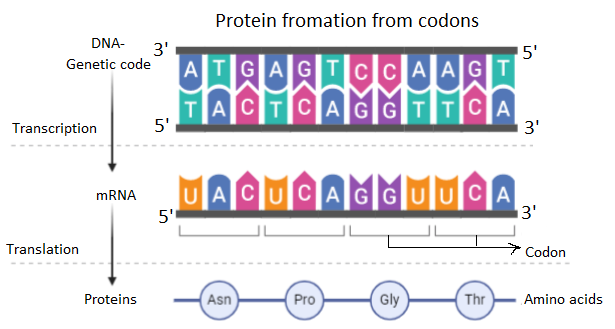 Therefore, from the above discussion, we can conclude that option D is the correct answer.