Verified
146.7k+ views
Hint: In our daily life we interact with many things and in general interactions happen between biotic and abiotic components. There is a constant transfer of food and energy, which provides stability and makes the system dynamic.

Complete step by step solution:
1. Atmosphere
Atmosphere is the air envelope which surrounds the earth. It is a type of a protective layer or envelope that surrounds the earth, sustains life on earth and protects us from unfriendly environments of outer space. It extends up to the height of about 1600 km from the earth surface. It also consists of life saving gases like \[{{O}_{2}}\] for human beings and animals and \[C{{O}_{2}}\] for plants.
2. Hydrosphere
Hydrosphere covers more than 75% of the earth surface either as fresh water or oceans. It includes our streams, ponds, lakes, rivers, seas, oceans etc.
3. Lithosphere
It is the mantle of rocks constituting the earth's crust. It is also called the solid component of earth, which includes soil, earth, rocks and mountains etc. Again, lithosphere comprises with three more layers namely:
Inner and Outer Core consists of a Central fluid or vaporized sphere of diameter of about 2500km from the center.
Mantle is about 2900-3000 km above the core which is in molten state.
Crust is the outermost solid zone about 8-40 km above the mantle.
4. Biosphere
Biosphere consists of all of the other sphere; atmosphere, lithosphere and hydrosphere. It influences and supports the entire biotic and abiotic life systems. 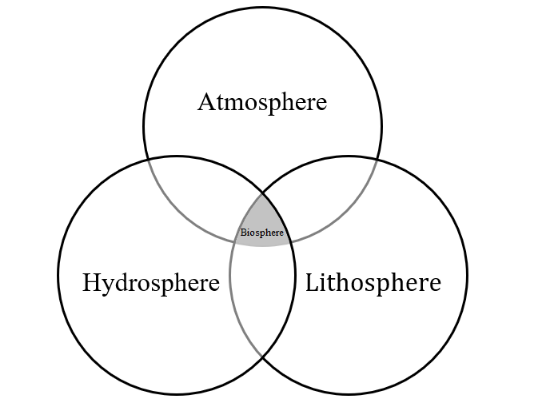 Therefore, the correct answer is (b).