Verified
Hint: Banana bonds are neither ionic nor coordinate but are covalent in nature. The name of banana bonds comes from the unique bent shaped structure of the bond.Two hydrogen atoms are present between the two central boron atoms.

Complete step by step answer:
The structure of the given compound, i.e. \[{B_2}{H_6}\] looks like the following: 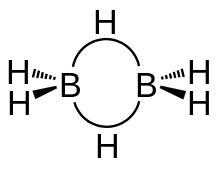 From this image, we can see that:
-Four hydrogen atoms are present at the terminal position.
-The length of the terminal B-H bond is relatively small as compared to the bridge B-H bond. -This indicates that the terminal B-H bonds are relatively weaker as compared to the bridge B-H bonds.
-According to the Molecular Orbital Theory, the bonds between the Boron atoms and the terminal hydrogen atoms can be described as conventional 2-centre, 2-electron covalent bonds. The bonding between the boron atoms and the bridging hydrogen atoms is, however, different from that in molecules such as hydrocarbons.
-After using 2 electrons to bond with the terminal hydrogen atoms, the boron atom is left with one additional electron left for bonding. The bridging hydrogen atoms are then offering one electron each. The B2H2 ring is held together by four electrons which are forming two 3-center 2-electron bonds. This type of bond is often referred to as a 'banana bond'.
Banana Bonds are otherwise known as Hydrogen Bridge Bonds. Hence, the two types of bonds present in \[{B_2}{H_6}\] are covalent and hydrogen bridge bond.

Note:
\[{B_2}{H_6}\]is commonly known as Diborane. It is a colorless, pyrophoric gas with a repulsively sweet odor. It is also known as Boroethane, borohydride and boron hexahydride. Diborane is highly flammable and also reacts with water.