State the requirements of chemiosmosis.

Verified
91.8k+ views
Hint: Plants are autotrophic organisms which synthesize their own food by photosynthesis. Here energy is produced in the form of ATP with the help of enzyme ATP synthase which needs to be activated for the synthesis of energy bonds.

Complete answer: -Chemiosmosis is also known as chemiosmotic hypothesis is a process occurring in plants that explains how ATP is synthesized in plant cells so as to make glucose through the Calvin cycle or Krebs cycle.
-In chemiosmosis, the movement of ions across a selectively permeable membrane takes place. The ions move down their electrochemical gradient. This process was discovered by Dr. Peter Mitchell in 1961. -For chemiosmosis to occur a proton gradient must be present, a membrane, a proton pump, and ATP synthase enzyme that is responsible for the synthesis of ATP which has to be used in the Calvin cycle.
-To create a proton gradient many factors are responsible such as transport of electrons, splitting of water and NADP reductase enzyme. These help to accumulate protons within the lumen of the thylakoid.
-Splitting of water gives out oxygen gas and protons. Oxygen gas is escaped as a product of photosynthesis and the protons of hydrogen ions accumulate within the lumen of the thylakoids because the splitting of water molecules takes place on the inner side of the membrane.
-When electrons move through the photosystems, protons from the stroma are transported across the membrane into the lumen of the thylakoid. This happens because the primary acceptor of an electron transfers its electron to an H carrier, therefore this molecule removes a proton from the stroma while transporting an electron.
-The NADP reductase enzyme is located towards the outer that is the stroma side of the membrane. Protons are necessary for the reduction of \[NADP^+\] to \[NADPH^+\] \[H^+\]. These protons are also removed from the stroma.
-Hence, all these factors contribute to creating a proton gradient in which stroma lacks protons whereas the lumen of the thylakoids has excess protons. When this gradient is broken down it provides enough energy to synthesize ATP. 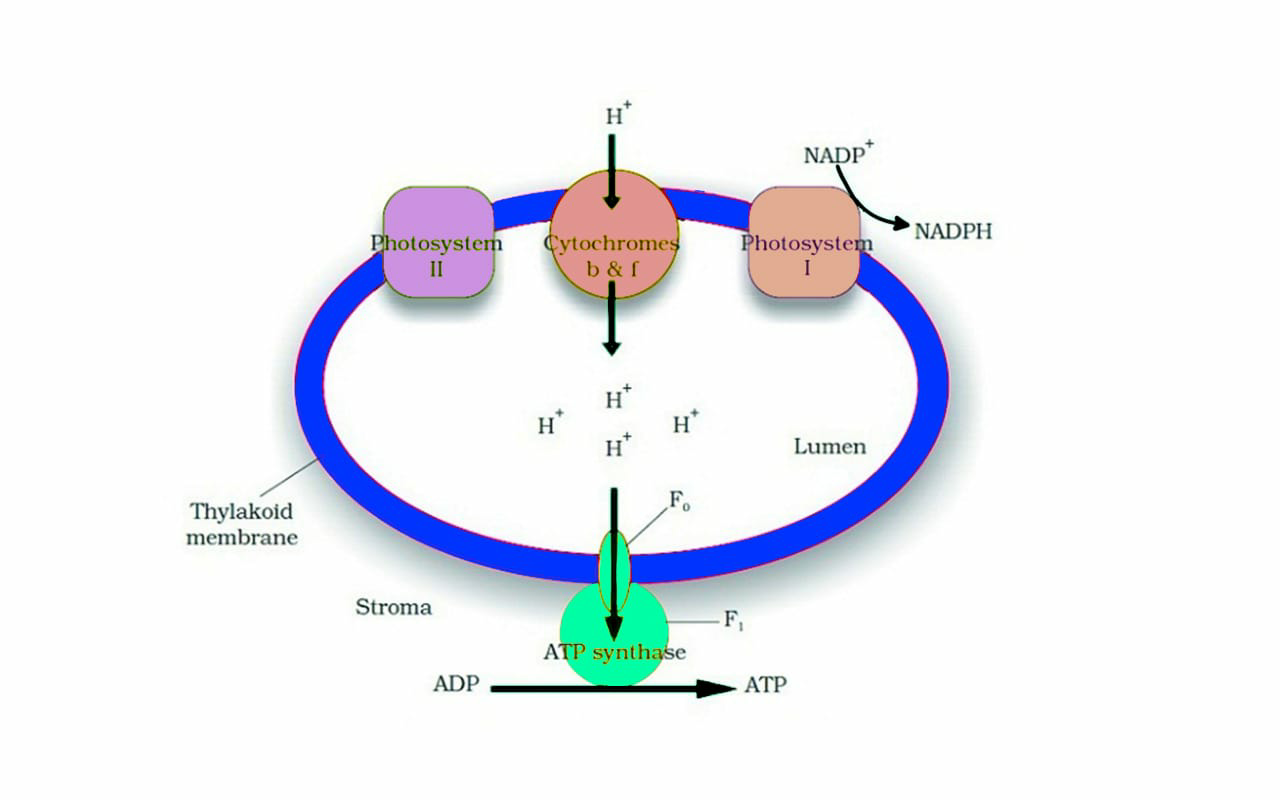 -The ATP synthase enzyme consists of two parts: the F$_O$ and the F$_1$. The F$_O$ is embedded in the thylakoid membrane and forms a transmembrane channel that carries out facilitated diffusion of protons across the membrane.
-When the proton gradient is broken, it is the breakdown which causes a conformational change in the F$_1$ particle of the ATP synthase, which makes the enzyme synthesize several molecules of energy-packed ATP.