Name the part of the flower which the tassels of the corn-cob represent.

Verified
79.7k+ views
Hint: Corn is a monoecious plant. Mono means "one".Monoecious plants are those that have both male flowers and female flowers as separate structures but on the same plant. The corn cob has long tassels which help to spread the pollen into the flow of the wind. This pollen dispersion allows growth of future progeny due to wider dispersion of pollen into the wind.

The tassels of corn cob represents the female part of the flower which is style and stigma. The corn cob plant has female flower clusters arranged on the stem which means it only blooms female flowers.

The colour of the tassels can be green, purple or yellow. The tassels are present at the terminal or end point (apex) of the corn stalk. These tassels have stigma on their terminal point.

The tassels are long as they are involved in the production of large no. of pollen grains. These help to trap the pollen in the wind flow for a wider dispersion and future progeny. 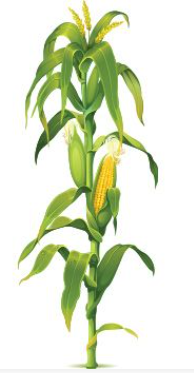