What is the molecular formula of a diamond?

Verified
63.6k+ views
Hint: Allotropy is the property of any element to exist in more than one form. Diamond, graphite, coke, etc. are called allotropes of carbon. The structure and the position of the atoms in the diamond lattice tell us the molecular formula of diamond and the nature of its bonds.

Complete answer:
Allotropes are the different forms that are possessed by an element that has different structural variations and chemical variations. The most common allotropes can be seen in carbon. Carbon possesses allotropy and has different forms like, graphite, diamond, coke, graphenes, fullerenes, etc. These forms consist of carbon as a sole atom which has different arrangement patterns in their respective crystal lattice.
Diamond is one of the allotropes of carbon that is a crystalline, solid, and homogenous form of carbon. Diamond consists of a 3 – dimensional structure of carbon network. The carbon atoms are $s{{p}^{3}}$ hybridized and form a tetrahedral geometry. Each carbon atom is linked with four other carbon atoms which are again linked with four carbons, which forms a network. These carbons are linked together with covalent bonds. The structure of diamond is: 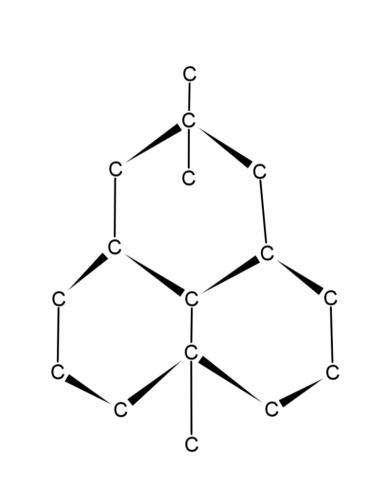 Hence, the molecular formula of diamond is C as it consists of only carbon atoms.