Verified
Hint: It is found in some of the molluscs as an olfactory receptor and may also act as a respiratory organ that helps in recognizing the water and the nutrients which are free of impurities.

Complete answer:
The osphradium is the chemoreceptor which is found in Pila. It detects whether the water has silt and other chemicals present in it or not and tests the suitable food particles that enter the body.

Additional Information:
-The chemoreceptors are the sensory receptors that send signals when coming in contact with certain chemical stimuli.
-The process of chemoreception helps in detecting the type of habits, food, mates, and predators.
-These chemoreceptors are generally found in the head region or the air passage and mouth region.
-The presence of osphradium is certain mollusks are their characteristic feature.
-It is the sensory organ of the Pila which regulates the movement of the water current which goes inside its mantle cavity.
-Pila is the genus that belongs to the phylum Mollusca.
-The phylum Mollusca is the second-largest phylum among the invertebrates.
-The three main features of the phylum Mollusca are the presence of the mantle cavity, radial, and nervous system.
-The mantle cavity is the outer shell which is responsible for the prices of respiration and excretion.
-The shell is made up of cellulose and chitin in most of the mollusks. 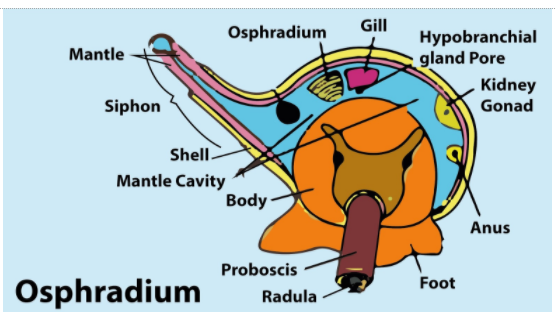 So, the correct answer is, ‘Osphradium.’