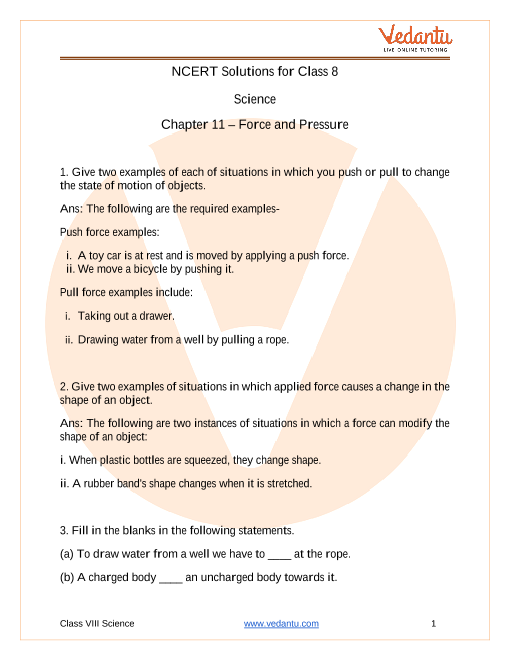 1. Give two examples of each of the situations in which you push or pull to change the state of motion of objects.

Ans: The following are the required examples-

2. Give two examples of situations in which applied force causes a change in the shape of an object.

Ans: The following are two instances of situations in which a force can modify the shape of an object:

3. Fill in the blanks in the following statements.

4. An archer stretches her bow while taking aim at the target. She then releases the arrow, which begins to move towards the target. Based on this information fill up the gaps in the following statements using the following terms.

5. In the following situations identify the agent exerting the force and the object on which it acts. State the effect of the force in each case.

(a) Squeezing a piece of lemon between the fingers to extract its juice.

(b) Taking out paste from a toothpaste tube.

(c) A load suspended from a spring while its other end is on a hook fixed to a wall.

(d) An athlete making a high jump to clear the bar at a certain height.

6. A blacksmith hammers a hot piece of iron while making a tool. How does the force due to hammering affect the piece of iron?

Ans: A blacksmith hammers a molten iron piece. He imparts a massive compressive force to the iron, causing it to alter shape.

7. An inflated balloon was pressed against a wall after it has been rubbed with a piece of synthetic cloth. It was found that the balloon sticks to the wall. What force might be responsible for the attraction between the balloon and the wall?

Ans: An inflated balloon becomes charged when it is rubbed against a wall after being rubbed with synthetic fabric. The balloon attaches to the wall because a charged body attracts an uncharged body. The electrostatic force is the force that exists between the charged balloon and the wall.

Ans: The muscular force applied by the hand and the weight owing to gravity are the forces operating on the plastic bucket. Because these two forces are equal and opposite one another, there is no change in the state of motion.

9. A rocket has been fired upwards to launch a satellite in its orbit. Name the two forces acting on the rocket immediately after leaving the launching pad.

Ans: The force of gravity/weight and friction caused by the earth's atmosphere are the two forces that act on the rocket shortly after launch.

(a) pressure of water

(b) the gravity of the earth

(c) the shape of a rubber bulb

Ans: (d) Atmospheric pressure. When air escapes from the dropper's nozzle, it creates a pressure difference, which causes water to be pulled into the nozzle.

Vedantu’s NCERT solutions will give you clarity regarding various aspects of this chapter, which will consequently help you to solve questions from this chapter easily. In Chapter 11 Force and Pressure, you will come across the questions on applied force, changes in the object shape, etc. Some questions like the difference between force and pressure appear often in the exams which are explained in detail in the given solution.

The other essential types of questions are based on objects and force. Practicing these kinds of questions in this chapter will ensure that you have a good understanding of the topic. NCERT Class 8 Science Solutions for Force and Pressure PDF is also available here and can be accessed both offline and free of charge by students. Download the PDF Solution now for free.

Our proficient and experienced teachers have formulated all the solutions in a well-structured format to make your learning process easier. The following are the benefits you would get if you avail our free Class 8 Science Chapter 11 Solutions.

By downloading the free PDFs from Vedantu, you would obtain clarity regarding issues that you’re facing with Class 8 Science questions.

Not only for Science, but Vedantu’s study material is also available for every subject for every class. Each topic has been taken care of by our subject experts. All the solutions are well-crafted for students and all solutions fit the CBSE guidelines. Each topic in every subject has been explained in an organized manner and all the study materials and test-papers have been formulated accordingly. It will help students to find the solution to any particular problem quite easily. We have also added several miscellaneous questions that would help you understand the topic clearly.

If you feel you are not satisfied with the solutions and need any further help for solving your doubts, our in-house experts are always available around the clock to answer your questions. Download our Vedantu app now and get your doubts cleared right away.

1.What are the Main Topics in Forces and Pressure?

The chapter introduces force and pressure. You will come across the concept of force as pull and push. You will learn how force can change the motion of the body or shape of the body. You will also study contact forces and non-contact forces.

You will also be taught about pressure and how liquid and gases exert pressure. In the later part, you will also learn about Atmospheric pressure.

2. How Many Exercises and Questions are There in the Forces and Pressure?

The chapter comprises one exercise at the end of the chapter.

3. How to Reduce the Fear of Science with Vedantu’s NCERT Solutions?

Some of the students face problems while understanding the core concepts of science. Thus Vedantu has made the subject easier to understand with the help of our experienced teachers. The best way to learn is to take a smart forward step.

Our NCERT Solutions is one of the important parts of Class 8 Science study materials. Our experienced teachers have made these solutions with utmost care to make your preparation for exams easier.

The velocity of an item defines its state of motion - its speed in relation to its direction. As a result, inertia might be renamed. The tendency of an item to resist changes in velocity is known as inertia. If an object is at rest, it will remain at rest until an external force is applied to it.

6. What is the Nuclear Force?

All of the particles in the nucleus are affected by the nuclear force, specifically, between two neutrons, two protons, and a neutron and a proton.

In all situations, it is an enticing force. It's the force that holds the nucleus together by overcoming the massive repulsive force that exists between two positive protons.

7. What is Atmospheric Pressure?

8. What to do when we have a doubt in Chapter 11 in the Science subject?

When there are doubts regarding any questions, one can refer to Vedantu’s NCERT Solutions for Class 8 Chapter 11. If you are not satisfied with the solutions and want more assistance in resolving your issues, you can attend live sessions. You can download the Vedantu app for any doubts and queries. It will help you with all your queries. You can also access assignments, test series and mock tests to assess your weak and strong areas. These solutions are available at free of cost on the Vedantu app and on the Vedantu website.