Measurement of Utility and Its Analysis

Utility refers to the quality of goods that can meet our needs. Utility depends on the mental judgement of the consumer and is determined by several factors that influence consumer judgement. These factors include, for example, the intensity of the desire to be satisfied, and it satisfies different consumers in different ways, depending on their preferences. For example, enjoying a cup of coffee may benefit person A more than person B because a particular desire may be felt to varying degrees by different consumers.

The utility can be classified as follows:

The law of diminishing marginal utility is the foundation stone of utility analysis. It means that the value of a good, the extra utility derived from the good, declines as more of the good is consumed. If satisfaction is obtained from a good decline, then buyers are willing to pay a lower price. Hence, demand price is inversely related to the quantity demanded which is the law of demand. It is based on certain assumptions. 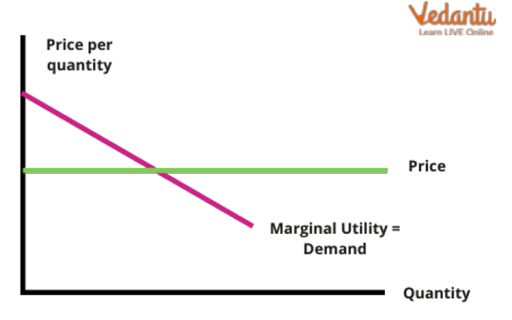 To understand the concepts and the measurement of utility further, we need to discuss two economic approaches in relation to utility, i.e., cardinal utility and ordinal utility.

So, the marginal utility of tea is 200, assuming that the consumer is at equilibrium.

It is important to know the meaning of utility and its measurement approaches as it helps us in understanding the demand behaviour of individual consumers and, by extension, the demand behaviour of the market as a whole. The basis of reasoning is that a consumer compares the utility of goods with the price they have to pay for it and purchases the same commodity again so long as the utility from them is at least equal to the price to be paid for them.

FAQs on Measurement of Utility and Its Analysis

1. What is consumer’s equilibrium?

Consumers are in equilibrium when they buy combinations of products that do not tend to rearrange their product purchases. It follows certain assumptions:

According to the law of equi-marginal utility, a rational individual does not spend his entire income on one commodity. The consumer knows that if he purchases more units of the same commodity, then the marginal utility of each successive unit would decline.

Hence, to get the maximum utility from his limited income, he spends his limited income in such a way that the last unit of money spent on different commodities yields equal marginal utility. It is assumed that the consumer decides to divide his total expenditure between different goods by taking into consideration not only their respective marginal utilities but also per unit cost.

3. What is the Indifference curve?