Which part of the brain controls posture and balance of the body?
A) Cerebrum
B) Medulla
C) Cerebellum
D) Pons varoli

Verified
Hint: This part is a major structure of the hindbrain that is located near the brainstem which is responsible for coordinating voluntary movements. It has the appearance of a separate structure attached to the brain. 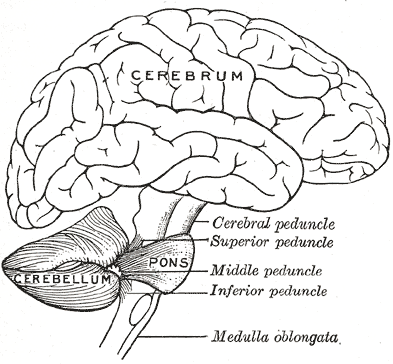 The cerebellum is situated at the backside of the brain and it has two hemispheres. This part of the brain contains the major complex network of the nerves. The cerebellum gets information from the sensory systems, the spinal cord, and from other parts of the brain and then it regulates the motor movements. All voluntary movements such as posture, balance, coordination, and speech are coordinated by the cerebellum which results in the smooth and balanced muscular activity. In all vertebrates, it is usually smaller than cerebrum.

Additional information:
It consists of two partially separated hemispheres which connect by a centrally constricted structure called the vermis.
It is a relatively small portion of the brain, about ten percent of the total weight, but it contains mainly half of the brain’s neurons, specialized cells that transmit information through electrical signals.
Damage happens to the cerebellum, while not causing paralysis or intellectual impairment, might lead to a lack of balance, slower movements, and shaking. Complex physical tasks will become unsteady and halting.
Cerebellum is also necessary for several types of motor learning, most notably learning to adjust to changes in sensorimotor relationships.

So, the correct answer is ‘cerebellum’.

Note:
-Cerebellum is the latin word used for “little brain”.
-The cerebellar vermis is an unpaired medial structure which divides the cerebellar hemispheres. It is involved in cardiovascular regulation during movement and posture changes.