Verified
91.8k+ views
Hint: The formation of vascular cambium is regulated by a network of interacting signal feedback loops which means the signals received from the xylem and phloem act to regulate internal factors of the cambium.

Additional Information:
The vascular cambium is the main growth tissue of stem and roots in many plants especially in dicotyledonous plants as well as some gymnosperms and certain vascular plants. This type of tissue produces secondary xylem towards the pit and secondary phloem towards the bark as shown in the diagram below-
The cambium present between xylem and phloem is known as Intrafascicular cambium and the cells that become meristematic during secondary growth between neighboring vascular bundles from the interfascicular cambium. Both these cambiums join to form the cambium ring separating the primary xylem and primary phloem. This vascular cambium consists of mainly two types of cells
-Fusiform cells
-Ray’s initials.
So, the correct answer is option (D) “Differential action of hormones”. 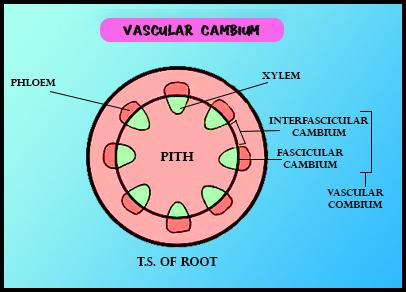