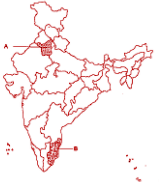 Verified
120k+ views
Hint:
For point A: It is one of the 28 states in India, situated in the northern piece of the nation.
For point B: Its capital and biggest city is Chennai. It lies in the southernmost piece of the Indian subcontinent and is circumscribed by the association region of Puducherry and the South Indian conditions of Kerala, Karnataka, and Andhra Pradesh.

Complete answer:
Tamil Nadu is proscribed by the jap Ghats on the north, by the Nilgiri Mountains, the Meghamalai Hills, and Kerala on the west, by the Bay of geographical area within the east, by the Gulf of Mannar, and also the Palk Strait on the southeast, and by the ocean on the south. Chandigarh is the state capital, Faridabad in National Capital Region is the most crowded city of the state, and Gurugram is a main monetary centre point of the NCR, with significant Fortune 500 organizations situated in it. Faridabad has been portrayed as the eighth quickest developing city on the planet and the third most in India. In administrations, Gurugram positions number 1 in India in IT development rate and existing innovation framework, and number 2 in the startup biological system, advancement, and bearableness.
As per the given guide, point A shows the territory of Haryana which is significant wheat creating a state with the creation of 11117 thousand tons of wheat as per 2015 insights.
Also, point B shows Tamil Nadu which is the significant rice-delivering state with the absolute creation of $4049.9$ thousand tons of rice as indicated by 2015 insights.