The correct structure of ethylenediaminetetraacetic acid (EDTA) is:
(A) 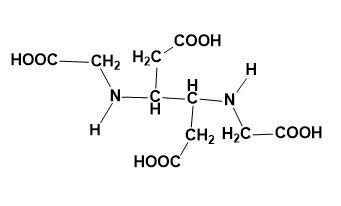 Verified
91.5k+ views
Hint:. EDTA (ethylenediaminetetraacetic acid) is a tetraprotic acid. As the name suggests, the structure will consist of ethane groups attached to the two amine groups which will result in the formation of ethylene diamine. Also, the four hydrogen atoms are replaced by the acetic acid groups resulting in complex structure.
- The molecular formula for EDTA is ${{C}_{10}}{{H}_{16}}{{N}_{2}}{{O}_{8}}$ .

Complete step by step answer:
Let us know about EDTA before determining its structure;
EDTA- Ethylenediaminetetraacetic acid is a complexing agent. It is a colourless and water-soluble compound in its salt form. It is a hexadentate ligand.
Structure- EDTA has four carboxylic acid groups and two amine groups with lone pairs of electrons on it. The ethane is attached to two amine groups making it to be called as ethylene diamine. Then the two hydrogens from the amine (each) are replaced by the acetic acid group which makes EDTA possible.
The structure of EDTA is: