Verified
119.4k+ views
Hint:Human eye is the visual sensory organ. It is one of the most complex and sensitive organs of the body. The eye consists of three major layers that constitute it. The external layer is formed by the sclera and cornea. The middle layer is made of two parts which are anterior and posterior. The last layer is the sensory layer.

Complete answer:The eye is one of the five sensory organs that receive visual signals from environments and sends them for further processing to the brain. The human eye consists of various parts and units that work together and make us capable of seeing the beautiful world around us. The eye is a sensitive organ and is protected from mechanical injury by the socket in which it is enclosed. The eyeball stays intact in the eye socket and the movement of the eyeball is regulated by 6 extraocular muscles. The optic foramen which is the opening behind the eyeball holds the optic nerve which provides signals to the brain. 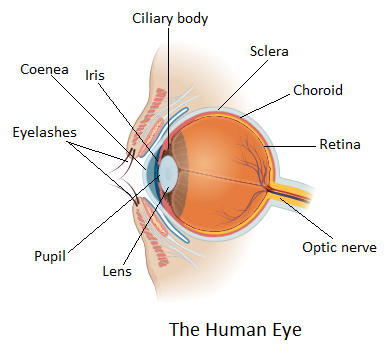 Thus, from the above discussion, we can conclude that the right answer is option A.