Verified
118.8k+ views
Hint: They are thick and lignified tissues that make the plants hard and stiff, and provide additional support, rigidity, and strength to the plant body. They are dead tissues lacking in protoplasm, and are elongated and pointed at both the ends.

Complete answer:
Sclereids or stone cells are a reduced form of the sclerenchyma cells. They are highly thickened and lignified cellular walls that form small bundles of durable layers of tissue in most plants. They often occur singly or in small groups and give rise to a granular texture in fruits, for example, pears. It is also known as a stone cell. Sclereids are typically found in the epidermis, ground tissues, and vascular tissues. Its primary function is to provide strength or support to soft ground tissues. They are extremely variable in shape and are present in various tissues of the plant, such as the periderm, cortex, pith, xylem, and phloem.

Additional Information: -Collenchyma cells tend to have very thin primary walls along with some areas of secondary thickening. It provides extra mechanical and structural support, particularly to new shoots.
-Plant fibers are generally composed of cellulose in combination with lignin, such as cotton, hemp, jute, and flax.
-The xylem vessels are long tubes that help in the transportation of water and provide mechanical support. Each xylem vessel is formed by the end to end union of a large number of short, wide, lignified dead cells. In these cells both the nucleus and cytoplasm are absent.
So, the correct answer is, ‘ Sclerenchyma’.

Note: -The stone cells differ from the fiber cells by not being immensely elongated.
-It is the presence of numerous sclereids that form the cores of apples and produce the grainy texture of guavas.
-They are also present in leaves and fruits and also constitute the hard shell of nuts. 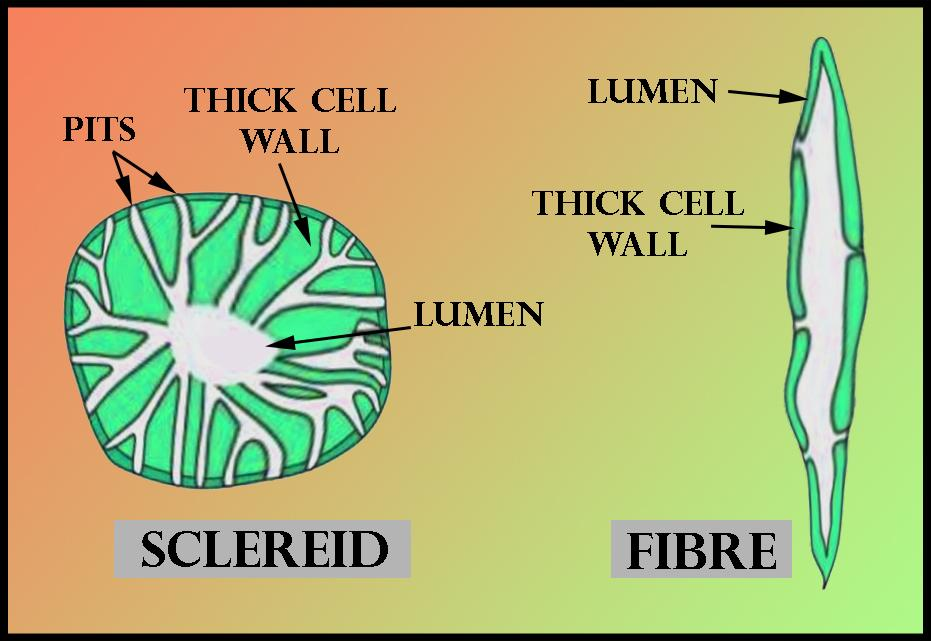