Complete step by step answer:
Total Internal reflection (TIR) is the phenomenon in which light travels from an optically denser to an optically rarer medium but is reflected back into the denser medium at the interface.

Where 1 and 2 are the optical densities or refractive indices of the optically rarer and optically denser medium respectively.

In this case the whole of the incident ray is completely reflected back into the medium i.e. 100%. There is no refracted ray. 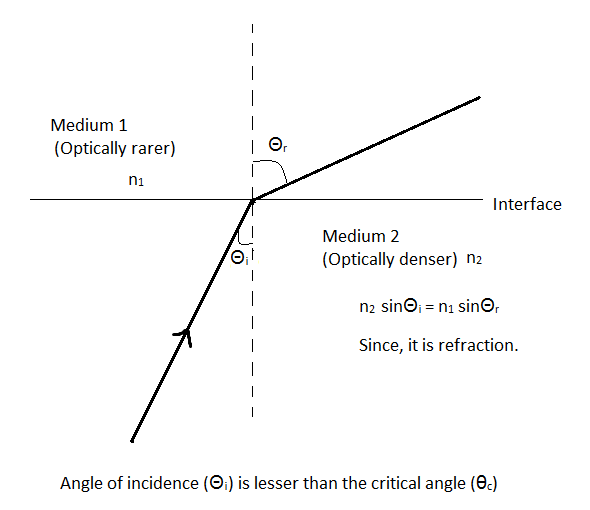 Additional information:
Total internal reflection causes the sparkling effect in a diamond. The diamond craftsman crafts the diamond in a way such as to give the contours angles which cause an incident angle more than the critical angle of the diamond (about 250). The light undergoes multiple total internal reflections inside the diamond giving it a dazzling look. However, unpolished, uncarved diamonds do not shine in this manner. It is the skill of the craftsmen that makes it possible.

Note: Students can make a mistake in the formula for critical angle confusing which optical density should be written as the numerator and which as the denominator.
To aid in remembering this, it should be noted that since the value of the sine function is always lesser than 1, the optical density of the rarer medium should be written as the numerator, so as to make it a fraction less than 1.

Advantages and Limitations of Internal Audit