Express in radians and also in degrees the angle of a regular polygon of (i). 40 sides (ii). n sides.

Verified
Hint: Try to express the square and regular pentagon in terms of triangles and hence, try to impose the same for a regular polygon with sides 40 and n. Then, find the angle for them in degrees and convert it to radians by using the conversion factor \[\dfrac{\pi }{{180^\circ }}\].

Complete step-by-step answer:
A polygon is a closed figure formed with straight lines.
A regular polygon is a polygon having all of its sides equal and all the angles equal.
The simplest polygon is the triangle and the sum of its angles is 180°.
A four-sided regular polygon is called a square. A square can be expressed as two triangles as shown in the figure. Hence, the sum of the angles of the square is \[2 \times 180^\circ\], which is \[360^\circ \]. 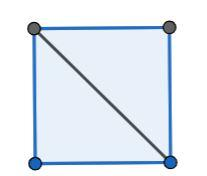 A five-sided regular polygon is called a regular pentagon. A regular pentagon can be expressed as three triangles as shown in the figure. Hence, the sum of the angles is \[3 \times 180^\circ \],which is \[540^\circ \]. 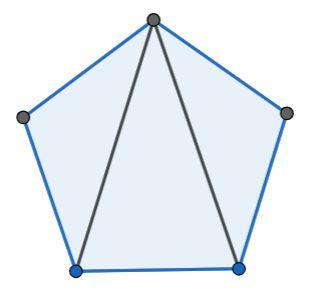