Check if the given statement is correct or not: In any triangle, the side opposite to the larger (greater) angle is longer.
(a) True
(b) False

Complete step-by-step answer:
We have to check if the statement given in the question “In any triangle, the side opposite to the larger (greater) angle is longer” is correct or not.
Let’s consider the $\Delta ABC$ such that $\angle B>\angle C$. We have to check if $AC>AB$.
We will draw a line BD on AC such that $\angle DBC=\angle ABC$, as given in the figure. This construction is possible as $\angle B>\angle C$. 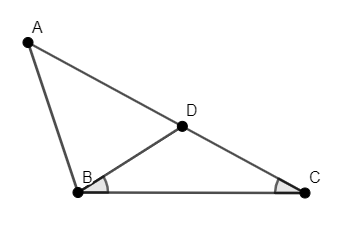