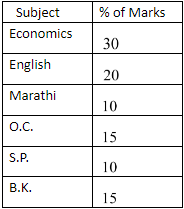 Verified
129.6k+ views
Hint: In this question we have to draw a pie chart for the given data. We need to change the percentage value into the measurement of angle. Then we will draw the pie chart according to that data.