The Electoral Process is an important chapter included in the Political Science Syllabus for Class 10 Maharashtra Board students. The chapter helps students get associated with the concepts of Elections in countries. In order to develop a good understanding of the chapter, students can get the solutions to questions related to the chapter. Learning the solutions will enable students to cover all the important topics in the chapter.

The solutions for the chapter called the Electoral Process have been curated by the learned subject matter experts of Vedantu. All the solutions have been provided in accordance with the syllabus of the students. These solutions prove to be helpful study materials as students can definitely find helpful information from these resources. Download Class 10 Political Science Chapter 2 PDF solutions right now.

Choose the Correct Option From the Given Options and Complete the Sentences.

Ans: The correct answer is (a) President.

The President of India appoints the Election Commissioner. The commission of election was established in 1950 and is autonomous.

3. Constituencies are created by ..........committee of the Election Commission.

Ans: The correct answer is (b) Delimitation.

State Whether the Following Statements are True or False. Give Reasons for Your Answer.

1. The Elections Commission lays down the code of conduct during elections.

Ans: The statement is true.

The Indian Election Commission established a code of conduct for elections to ensure that candidates were fairly chosen by the electorate without the use of any force or threats, upholding democracy.

2. Under special circumstances the Election Commission holds re-elections in a particular constituency for a second time.

Ans: The statement is true.

The election commission has the authority to call for a new election if there are any issues with the poll that interfere with the usual course of the election.

3. The state government decides when and in how many stages the elections would be held in a particular State.

Ans: The statement is false.

The population density of a state influences the decision of the Indian Election Commission regarding when and in how many stages the elections will be held there. 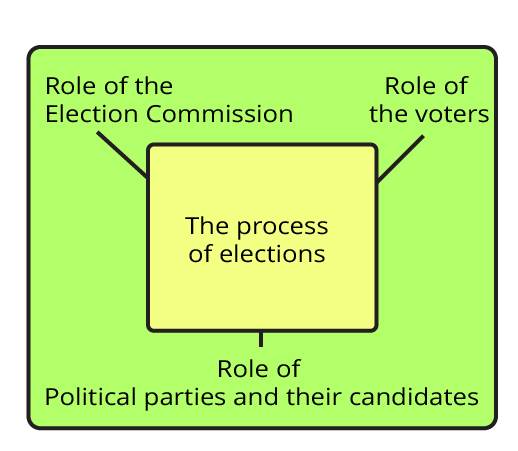 Incomplete Chart On the Process of Elections

1. Explain the functions of the Election Commission.

2. Write some additional information about most of the Election Commissioners.

3. Explain the meaning of the Code of Conduct.

1) Organise a mock poll in the school to understand the process of voting.

Ans: Do it yourself.

1) How do political parties suffer due to family monopoly in the party?

Ans: Family monopoly affects the political parties in many ways as in this the leaders change from the family itself and this denies the opportunity of effective leaders to represent the community. Also because of the family monopoly, the decisions made become centralized, and also the freedom of expression and criticism lacks space in the party.

2) What do you understand about the system of ‘One Vote One Value’?

Thrive shows equality in citizens and is a key to democracy.

3) Which two conditions among the following are the violation of the code of conduct?

Which of these rules would you include in the code of conduct for voters?

Ans: According to me first and the second point is the violation of the code of conduct as distributing items is not allowed.

What Will You Do?

1) Voting is our duty as well as responsibility.

Ans: Voting gives the right to the citizens of a country to choose their future leader. It is a process that makes us realize the importance of being a citizen. Voting offers everyone a medium of expression. Every vote counts, disregarding caste, sex, religion, etc. Therefore, voting is not just a right, it is the responsibility of every citizen to make a choice and make a change.

1) Some constituencies are kept reserved for scheduled caste and scheduled tribes.

Ans: Some constituencies are kept reserved for scheduled caste and scheduled tribes because this gives the minority communities a chance to reach to respective legislative authorities. This ensures the participation of weak and needy people.

2)  Every political party has an election symbol?

Ans: Every political party has an election symbol because these party symbols help the illiterate to easily identify and vote as these symbols are present on the ballot papers. Also, these symbols are allocated by the Election Commission of India.

3) At the time of voting and counting of votes, the official representatives of political parties remain present.

4) Recognised parties have equal opportunity to present their side before media such as television and radio.

Ans: The recognized parties have an equal opportunity to present their side before the media because this helps create and shape public opinion and it also helps in strengthening society through the political approach.

Why is it Required?

1)  When candidates have only the condition of age as eligibility, why should they give other information to the election commission?

2) Why are the candidates required to give the information about their property to the Election Commission?

Ans: The candidates are required to give the information regarding their property to the Election Commission so that they can prevent the misuse of the power of money to win the elections.

1)  What criteria are laid down by the Election Commission for giving recognition to political parties?

Ans: The party needs to win 6% of the votes in four states and also it needs to win 4 Lok Sabha seats from any state to get recognition in a general election for the national party.

Though, for a state party, it needs to win 8% of the total valid votes.

Importance of Maharashtra Board Political Science Class 10 Chapter 2 The Electoral Process is an essential chapter that teaches students the value of elections in any country. Students who want to score good marks in the examination and rank higher will have to gain a good understanding of the chapter. The chapter firstly educates students about the importance of the Election Commission and the process of Election. Students can learn that voting is a constitutional right and responsibility of the voter.

The chapter also educates students about the significance of the people or citizens in the process of elections. Students will also find some important details about the electoral process and the different steps in the process. Apart from that, the chapter also discloses important information about the types of elections such as Lok Sabha elections, general elections and much more. Students will be able to learn some important details related to the improvements made in the electoral process and election commission. All these details will provide a better understanding of the chapter.

Thoroughly reading the Class 10 Political Science Chapter 2 Solutions will assist the students in grasping all topics included in this chapter. They can use these details to answer questions in the exams and score high marks.

Do you want to score good marks in your upcoming Maharashtra Board exams? Download the Maharashtra Board Class 10 Political Science Solutions Chapter 2 The Electoral Process right now from Vedantu. Include the solutions in your study material and you can start preparing for your exams in an efficient way.

1. Who was the first chief election commissioner after the independence of India?

Sukumar Sen was the first chief election commissioner after India’s independence when the Election Commission was established in 1950.

2. Who was the first voter of India?

Sham Sharan Negi from Himachal Pradesh was the first voter in India. He voted during the Lok Sabha elections that took place on the 25th of October, 1951 for the first time.

3. Who is responsible for appointing the Election Commissioner in India?

The President is responsible for appointing the Election Commissioner in India.

4. What functions does the Election Commission have?

The functions of the Election Commission are:

5. Which committee of the Election Commission is responsible for the creation of constituencies?

The Delimitation Committee is responsible for the creation of Constituencies in the Election commission.