In the Maharashtra Board Class 10 syllabus, the chapter Climate holds a very important place. This chapter discusses some important theories and concepts used behind the Climate.

The chapter requires a lot of practice, and to understand the chapter properly, students will have to practice from the solutions provided by Vedantu experts. The solutions will cover everything significant about the chapter so that students don’t have to miss out on important details about the sub-topics and problems of the chapter. For further help in solving questions from the chapter, download Free PDF with Solutions of Class 10 Chapter 4 Climate.

1. Write the names of the States/Regions in appropriate columns:

2. State whether right or wrong. Rewrite the wrong sentences

3. Conventional type of rainfall is not prominent in India.

Ans:  The equator crosses Brazil's northern area, and convectional showers are a characteristic of equatorial locations.

5. There is not much difference in the range of temperature in Manaus.

Ans:  Manaus is near the equator and situated in northern Brazil.

6. India receives precipitation from the North-East Monsoon winds too.

1. Describe in brief the changes occurring in the climatic conditions of India while going from south to north.

Ans: India has a monsoon-style climate. However, due to the latitudinal location and altitude of the region, India has a variety of climates.

2. Explain the importance of the Himalayas and the Indian Ocean with respect to the climate of India.

Ans: The climate of India and the beginning of the monsoons are significantly influenced by the Indian Ocean and the Himalayan mountain ranges.

3. Discuss the factors affecting the climate of Brazil.

4. Compare the climates of Brazil and India.

Ans: The comparison of the climates of Brazil and India is given below:

5. With the help of the internet, obtain information regarding the annual average temperatures of the continental location of Brasilia and Bhopal and explain it with the help of a graph.

Ans:  Information about Brasilia: Tropical climate is what Brasilia has. In Brasilia, the summers are significantly more rainy than the winters. 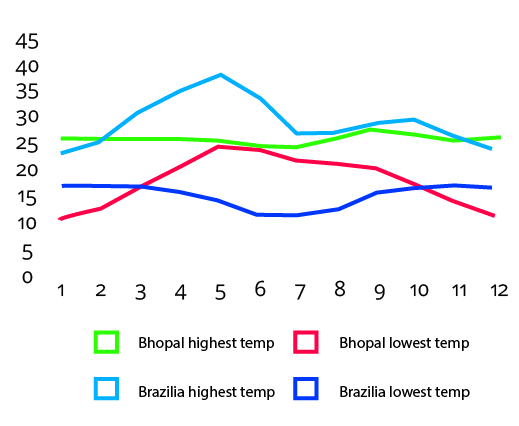 Ans: Cherrapunji and Mawsynram receive more rainfall as compared to Shillong because they are on the windward side of the hills and Shillong lies on the leeward side.

It is common in Shillong to see thunderstorms on the horizon at night but have no rain the next day.

Give it a Try.

1. Considering the location, and extent of Brazil and India, look for the differences in the elements of climate like temperature and rainfall as per direction. Write a short note on it.

Ans: The climatic conditions of both the countries- India and Brazil are influenced by their coastline. Generally, India experiences a tropical and subtropical climate, because the Tropic of Cancer passes through the center of India.

Northern Brazil has a hot and humid climate and Southern Brazil experiences a temperate climate.

3. In which part of India are three crops grown in a year? How is this related to the rainfall over there?

Ans: Usually in many states like Assam, West Bengal, Odisha, etc, three crops are grown in a year. And also in the coastal areas of Tamil Nadu, rice is grown three times a year. The North East Monsoon winds pick up the moisture and give rain to the eastern coast of Tamil Nadu.

Study the graphs given in fig. 4.4 and answer the following questions.

Observe Fig 4.3 and write the answers.

1. What difference do you find between the rainy seasons of Chennai and other cities of India?

Ans: Chennai mainly receives rainfall in winter which is from October to December whereas other cities mostly receive rainfall from June to September.

2. What similarity do you see in the temperature curves of Delhi and Kolkata?

Ans: The similarity seen in the temperature curves of Delhi and Kolkata is that they both have extreme temperatures.

3. Calculate the average range of minimum and maximum temperatures of all four cities.

Ans: The average range of minimum and maximum temperatures of all the four cities are as follows:

4. In which city is the range minimum? What can you infer from this?

Ans: The range is minimum in Delhi. It can be inferred that the climate of Delhi overlaps between the monsoon humid subtropics and the semi-arid with high variation.

5. In which city is the range maximum? What can you infer from this about its climate?

Ans: The range is maximum in Chennai. It can be inferred that Chennai has a tropical wet and dry climate and also that the city lies on the thermal equator and is on the coast.

6. Based on the temperature and rainfall of Mumbai, comment upon its climate.

Ans: Based on the temperature and rainfall of Mumbai it can be said that the climate of Mumbai is a Tropical wet and dry climate. Also, Mumbai’s climate is moderately hot with a high level of humidity.

7. Classify the cities as cities with equable and extreme climates.

Importance of Maharashtra Board textbook solutions for Class 10 Geography Climate

The Class 10 Geography Chapter 4 Climate is a crucial chapter included in the syllabus for Maharashtra Board students. The chapter provides information about all the different forms of quadratic equations and how they can be represented. The chapter also talks about the different methods of solving quadratic equations, such as the Factorization Method, the method of completing the square, and the Quadratic Formula. Students will learn about different concepts such as Nature of Roots, Factor Theorem, and Rolle’s Theorem in the chapter.

1. Access to solutions by experts: Getting guidance and learning from experts who have curated the answers that focus on learning standards specific to the age group. It also provides well explained and easy to understand solutions for a student.

2. Beneficial for resolving doubts: Sometimes, questions asked in the chapter become challenging to comprehend, especially for students who find Geography difficult. The textbook solutions can present them with elaborative and comprehensive answers or solutions which will benefit them in case of doubts.

3. Learning through mistakes: When a student is trying to solve a question, it is often observed that they get the correct answers but do not follow the proper method. In such cases, textbook solutions can help them understand the experts' approach, which they can use while finding the answers.

Download Maharashtra board class 10 geography solutions chapter 4 climate and begin practising right now. There are a lot of concepts and formulas that you have to keep in mind for completing the chapter. Hence, early preparation will help you improve your understanding of the chapter. Download the PDF version of these solutions from Vedantu today.