Verified
Hint: B.H.C contains carbon, hydrogen and chlorine. It is obtained from benzene. The chemical formula of B.H.C is \[{{\rm{C}}_6}{{\rm{H}}_6}{\rm{C}}{{\rm{l}}_6}\]. It has a ring containing six carbon atoms. Each carbon atom is joined to one hydrogen atom and one chlorine atom. Only single bonds are present in this molecule.

Complete answer:
The full name of B.H.C. is benzene hexachloride or 1,2,3,4,5,6-hexachlorocyclohexane. It is obtained by the addition of chlorine to benzene in presence of light. For this reaction to occur, oxygen and substitutional catalysts should be absent. 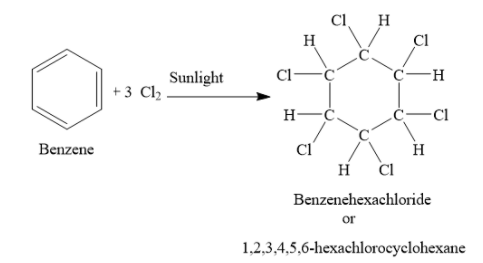 The chemical formula of B.H.C is \[{{\rm{C}}_6}{{\rm{H}}_6}{\rm{C}}{{\rm{l}}_6}\]. It has six carbon atoms, six hydrogen atoms and six chlorine atoms. It is colourless and has slightly musty odour. It is an agricultural insecticide. It is also used as a pharmaceutical treatment for scabies and lice. It is carcinogenic to humans. It causes skin irritation. If swallowed, inhaled or absorbed through skin, it can be fatal. It is a nervous system stimulant and causes violent convulsions.
Lindane (also called Gammexane) is one of the stereoisomers of B.H.C. Lindane is an insecticide. It is used to prevent crops from insects. Burning, stinging or redness of skin are some of the side effects of lindane.

Note: B.H.C is called benzene hexachloride or 1,2,3,4,5,6-hexachlorocyclohexane or gammexane. It is obtained by addition of three chlorine molecules to one benzene molecule, in presence of sunlight.