Which part of the brain controls emotions like love, anger and pleasure?
A) Medulla oblongata
B) Hypothalamus
C) Cerebrum
D) Cerebellum

Verified
Hint: It is a part of diencephalon. Its main role is to keep the body in homeostasis and also helps in hormone production.

Complete answer:
To answer this question, first, we need to know about the structure of the brain. The brain is an organ composed of a large mass of nerve tissue that is protected inside the skull. It functions as a control centre by interpreting, receiving, and directing sensory information throughout the body. The brain anatomy is complicated because of its complex structure. The human brain is divided into three parts and they are fore brain, midbrain, and hindbrain. The below diagram shows different parts of the brain that play a different function. 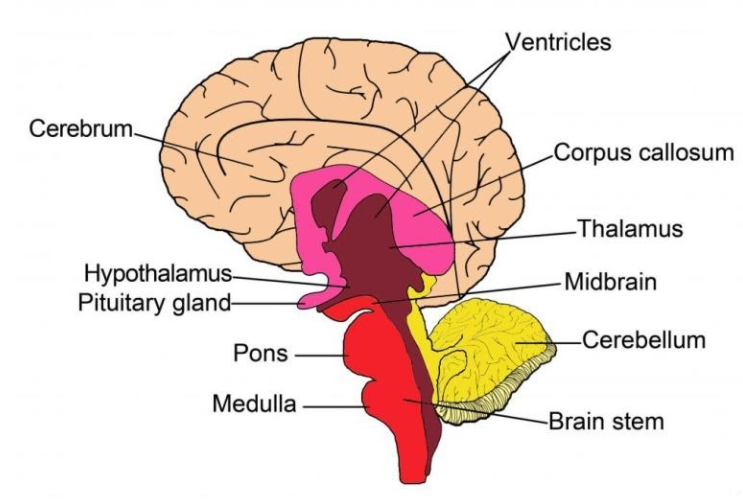 Now, lets us find the solution from the given options -
Medulla oblongata is found in the hindbrain. It receives and incorporates signals from the spinal cord, and sends these signals to the cerebellum and thalamus. It contains centres to regulate heart rate, breathing, blood pressure, salivation, swallowing, vomiting, sneezing and coughing and some other involuntary movements.
Hypothalamus is the brain part controlling the endocrine system. The hypothalamus gland directs other organs and endocrine glands to either inhibit or stimulate the production of hormones. Hypothalamus functions as a regulator of emotion to regulate levels of pleasure, sexual desire, anger, and aggression. The hypothalamus triggers certain emotional responses and stimulates the release of hormones. So this region of the brain regulates the emotions.
The cerebrum is the core of the human brain. It is responsible for our voluntary functions and processes our sense organs knowledge. This area is responsible for high functions in the brain such as learning, thinking, and memory.
The cerebellum is the area behind the brainstem, at the back and bottom of the brain. The cerebellum has many functions related to movement and coordination. It is known as a ‘little brain’ which mainly controls movement and balance. Also, it can play a role in cognitive functions such as language and attention.

Thus, the right answer is option B i.e., hypothalamus.

Note: The hypothalamus is an anterior and inferior diencephalon structure of the brain located at the thalamus. It is also known as the thermoregulatory centre as it maintains the body temperature.