The shortest distance between two intersecting lines is always equal to _________.

Verified
Hint: The shortest distance between two lines is equal to determining how far apart lines are. This can be done by measuring the length of a line that is perpendicular to both of them. and in this case, we have two intersecting lines. 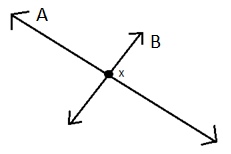