Verified
129.6k+ views
Hint: It is the primary pigment found in rod photoreceptors and they are extremely sensitive to light, enabling vision in low-light conditions.

Complete answer:Rhodopsin which is also known as visual purple is
a pigment-containing sensory protein that primarily converts light into an electrical signal.

Rhodopsin is found in several organisms, right from higher vertebrates to bacteria. In many animals with the gift of vision, including humans, it is required for vision in dim low light. It is located in the retina of the eye, more specifically, within the tightly packed disks that create the outer segment of the retina’s photoreceptor rod cells, which are again specially adapted for vision under faint light conditions.
When our eye is exposed to light, the 11-cis-retinal component of rhodopsin is transformed into all-trans-retinal, resulting in a change in the configuration of the rhodopsin molecule altogether. This change in its configuration initiates a phototransduction cascade step within the rod, wherein light is converted into an electrical signal which is then further transmitted along the optic nerve up to the visual cortex in the brain.

All-trans-retinal that is released is either stored or generally changed back to 11-cis-retinal and transported back to the rods. This allows for the regeneration of rhodopsin. Rhodopsin regeneration takes place in the presence of darkness and is central to dark adaptation.
When the rhodopsin levels gradually increase, this enables rod cells to become increasingly sensitive to dim light. Given below is the rhodopsin cycle: 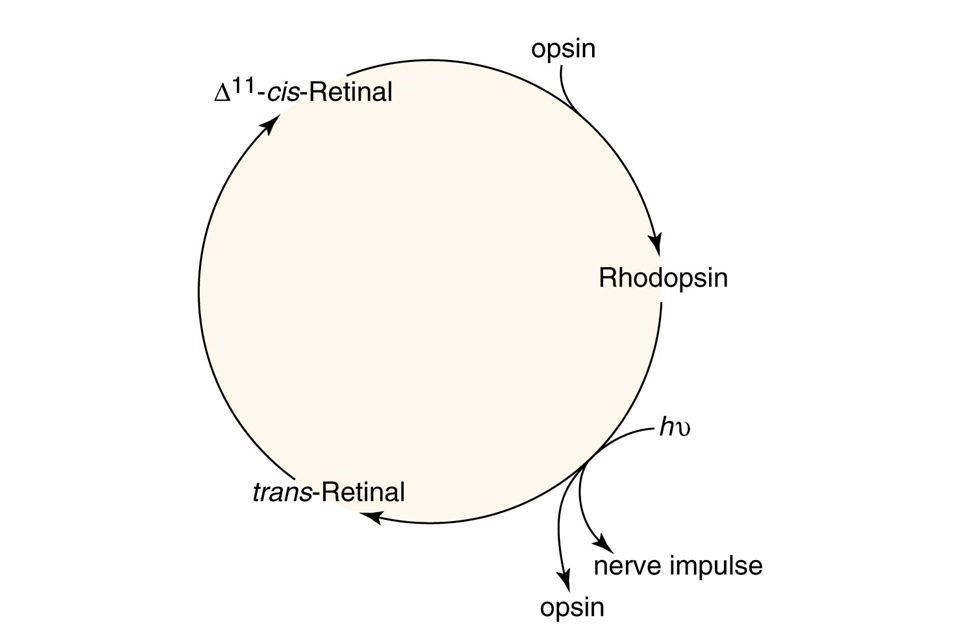 So, the correct answer is ‘Rhodopsin’.

Note:The rhodopsin protein is encoded by the specific rhodopsin gene, which is designated as RHO (or Rho). Rhodopsin can also get affected by several environmental factors, specifically by deficiency of vitamin A.