The life begins above the level
A. Molecule
B. Amino acid
C. Mixture
D. Compound

Verified
129.6k+ views
Hint: Possible precursors for protein synthesis evolution provide a method for synthesizing short peptide cofactors or creating a method for RNA replication.
Ancestral ribosome was solely composed of RNA, though proteins have since taken over certain functions.
The key outstanding issues on this subject include defining the competitive mechanism for ribosome evolution and how the genetic code evolved.

Complete answer: Some of the first theories, popularized in the wake of the Miller-Urey experiment by biochemist Sidney Fox, was that amino acids were brought together as basic proteins. Proteins perform a vast range of functions in modern organisms, including acting as enzymes which accelerate essential chemical reactions. Yet this protein-first hypothesis has fallen largely out of favour.

A much more common notion is that life originated in an "RNA Universe" with RNA, a close cousin to DNA RNA, like DNA, can hold genes and replicate itself, but it can also fold up to act as an enzyme, much like a protein. The theory was that first, species-dependent entirely on RNA emerged, and then later, DNA and protein evolved. The DNA is also made up of amino acids in (A-T), (G-C) combinations as shown in the given figure, 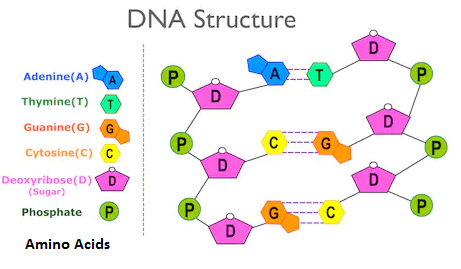 The RNA World has accrued a great deal of supporting evidence, but it is not obvious that RNA alone was adequate. Some researchers have proposed in recent years that RNA only really meets its capacity when combined with proteins – and that both may have evolved to get going in life.

The third line of thought is that pure blobs or bubbles became the earliest creatures. These "protocells," with one main aspect, may have resembled modern cells: they served as reservoirs for all the other components of life. More modern protocells produced by the Nobel prize-winning biologist Jack Szostak often contain RNA that replicates itself.

So, the correct option is (B)