Verified
Hint: First, start by defining what a triangular pyramid actually is. Draw its diagram and visualise its shape. Count the number of faces and their respective shapes to arrive at the final answer. 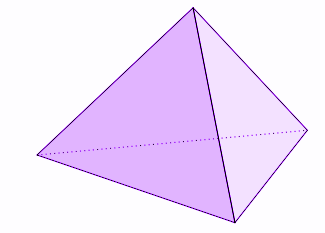 We can clearly see the four triangular faces in the above figure.
Hence, option (d) is the correct answer.

Note: In this question, it is important to visualise and understand the shape of a triangular pyramid. Also, note that the base can be any shape or size of triangle but usually it is an equilateral triangle and all the sides are the same. This means the three sides of the pyramid are the same size as each other and the pyramid looks the same if you rotate it.