Say true or false of the following statement.
The statement is, Two diameters of a circle will necessarily intersect
\[{\text{A}}{\text{.}}\] True
${\text{B}}{\text{.}}$ False

Verified
148.2k+ views
Hint: Here we go through by first making the diagram of a circle and then make two different diameters in the circle then analyze the diameter whether they intersect or not.

And the diameter says a line segment whose endpoints lie on the circle and that passes through the center; this is the largest distance between any two points on the circle.

As we know from the above definition the diameter always passes through the center. And the line segment which joins center to the point on circumference is known as radius.

Now in the figure there are two diameters AB and CD which are passing through center O. 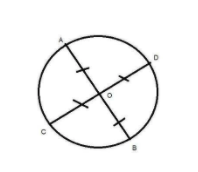 And we can say the line segments OA, OB, OC and OD are the radius of the circle.

So we can say that diameter=2$ \times $radius.

Hence the center bisects the diameter into two parts which are known as radius.

So we can say that the statement is true.

Hence option A is the correct answer.