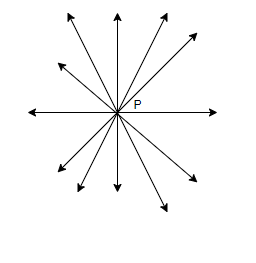 Note: We need to clearly know the definition of a point and a line. A point is an exact position or a location in the plane. Point is considered as a dimensionless object in the plane. While, a line is defined as a one dimensional figure that has no thickness and can be extended endlessly in both directions. A line doesn’t have a starting or an ending point. It is just endless. It is not practically possible to count all the lines passing through a point. Thus, we count the number of lines based on the number of possible slopes of the lines.

Perpendicular Distance Of A Point From A Plane

Magnetic and Electric Force on a Point Charge

Co-ordinate of a Point in Three Dimension

Lines of Symmetry in a Parallelogram