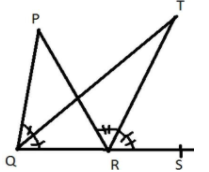 Note: Geometry has many shapes which are having many theorems. These theorems are relating the sides and angles of those shapes. Many interesting results can be obtained from the given shape by using relevant theorems. Many real life problems are being solved with the help of geometrical theorems. In the above question two important theorems for triangles are used. Similarly for other problems we may apply many theorems. A careful visualization of the shape is very important for getting the correct result.