Verified
Hint: LCM is elaborated as Least Common Multiple, which is the lowest common factor among the integers. To find the LCM of the given numbers, which is the lowest common number, which is divisible by all numbers for which we are finding the LCM, the method includes basic factorization of the numbers to find factors that are multiplied together to form a number. If the all given numbers are \[0\] for which LCM is being calculated, their LCM will also be \[0\]. First, find the factors of the number that are the number when multiplied together gives the original number.

Complete step by step answer:
To find the lowest common multiple of the numbers, let’s find the factors of the given numbers for which we have to find the LCM of each number \[72,90,120.\].
Factors are the integers, which, when multiplied together results in the original number only. First, find the factors of numbers. 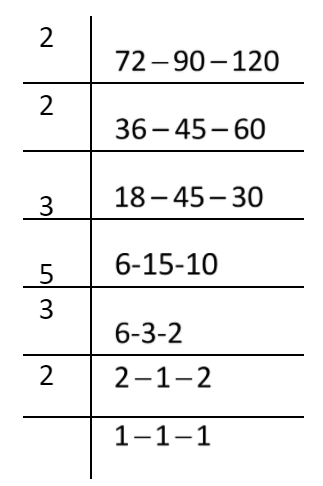 Application of LCM and HCF

Important Questions for CBSE Class 8 Social Science Our Past 3 Chapter 9 - The Making of the National Movement: 1870s -1947