Explain how xerarch succession progresses from xeric to mesic condition and forms a stable climax community.

Verified
Hint: In xerarch succession, lichens grow rocks and secrete acidic substances that help in weathering. Weathering helps in soil formation. Small plants grow in a small amount of soil. These plants are succeeded by other big plants and gradually succession proceeds to the climax community.

Complete answer: Xerosere refers to a type of plant succession which is limited by the availability of water. It occurs in dry areas. The series of events progress from xeric to mesic condition.
Primarily, the pioneer species secrete acids on the rocks. It is done mostly by lichens. Then rocks get dissolved, weathering takes place. Weathering leads to soil formation. Initially, less soil is formed, so the plants which can survive with little soil occupy the area and grow.
This happens during primary succession. Usually, bryophytes take this leading role.
Over time, these small plants are succeeded by bigger species. After some more stages like this, a stable stage is obtained and the climax community is formed. Thus, a mesic condition is approached as a xerophytic habitat turns into a mesophytic habitat. 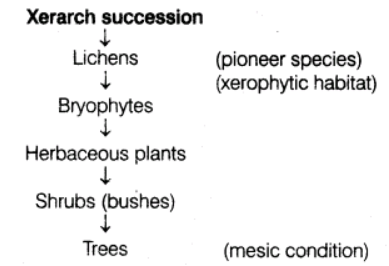 Note: In xerosere, primary succession occurs slowly because weathering takes much time. But as the soil is formed and occupied by some small plants, the habitat becomes more favorable for other species, so the next succession stages occur at faster rates.

How Do Humans Use Microbes?

How Do Plants Reproduce - Short Answer

Difference Between Environment and Ecology

How Does Your Reproductive System Work?

Food: Where Does it Come From?