Verified
129k+ views
Hint: A process of ecosystem bringing about changes with time. These include the biotic and climatic factors which constitute the entire ecosystem. These can both influence the ecosystem in both positive and negative aspects i.e construction and destruction respectively. It included various categories of species and their changes over the time in a specific area.

Complete answer:
Ecological succession is the gradual process by which ecosystems change and develop over time. It is further of three types namely primary, secondary and climax
> Primary succession is referred to as a combination of changes that occurs in a completely new habitat which hasn’t been altered before

> Climax succession is the last stage where the ecosystem becomes balanced and there is almost zero chances of any further mutation or changes in the environment.
Succession can be further—

- Hydrarch succession: when the plant succession occurs starting on relatively shallow water such as ponds reaching to a highest point of development in a mature forest. The hydrarch succession proceeds as
• A new formed water body
• The phytoplankton stage starts to grow in the water
• The phytoplanktons extend their roots to the ground and get submerged into water
• The soil starts to collect more dense due to the dead plants and the new plants starts to move on the surface
• Reed swamp stage — the water becomes more and more shallow and the soil gets rich in nutrients from the dead
• Sedge marsh — the water level decreases and the soil becomes unfavourable for the growth of reed swap. Cyperaceae become dominant. There is ultimately formation of terrestrial soil.
• Woodland forest stage — shrubs and trees start to grow. The soil becomes dry. 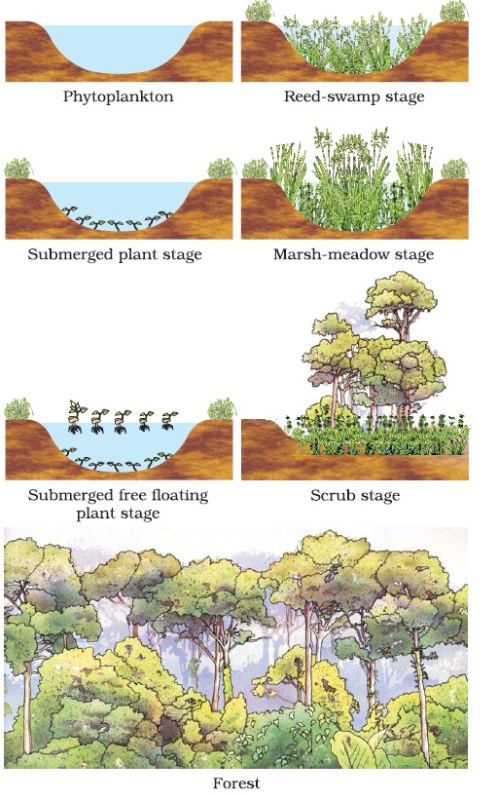 > Xerarch succession: plant succession starting on bare ground or rock and reaching up to a highest point in a mature climax forest.
This occurs in dry regions. It includes —
• Lichen stage — crustose lichen is a special form that can live in extreme conditions. In case of rainy days these become wet. They absorb all the water causing weathering of rocks. This allows the land to get prepared for its next stage.
• Foliage lichen stage — they are leaves like lichen and get attached at a single point. It produces shade on the previous growing lichen which makes their growth hinder. The rocks become rough.
• Moss stage — All the lichen litter gets collected making the soil more porous. The moss and lichens compete for water sources.
The lichens become dead adding more humus to soil.
• Herbaceous stage— The soil has a large amount of humus and litter. The herbaceous plants grow in the region.
• Shrub stage— the soil becomes favourable for shrubs. These develop wide cracks in rocks.
• Climax stage — the soil improved to a greater extent which allows the wooden trees to grow.