Complete step-by-step answer:
the fixed point using a ruler, the angle subtended by these two line segments gives us the required angle.
We draw a line segment AB and measure each of the angle from point A and join them as follows: Construct a copy of ∠ABC and ∠PQR:
Given Draw ∠ABC = 81° and draw its line of symmetry
We draw a line segment AB of some length using a ruler. Then with point B as the focus we measure an angle of 81° with a protractor and mark it on the figure, then we join the line segment from B to the mark and name the point C. Thus the angle ∠ABC = 81° is obtained.
To find the line of symmetry we use a compass, with the length from B to A, we fix the stationary end of the compass on point A and draw and arc.
We repeat the same step, with the length of B to C, from point C this time.
Both these arcs intersect at a point, the line joining point B and this point of intersection is called the line of symmetry and it subtends half of the actual angle of ∠ABC on both sides of it.
It looks as follows: 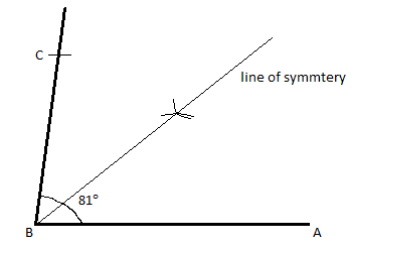 Given Draw ∠PQR = 125° and divide it into 4 equal parts
We draw a line segment PQ of some length using a ruler. Then with point Q as the focus we measure an angle of 125° with a protractor and mark it on the figure, then we join the line segment from B to the mark and name the point R. Thus the angle ∠PQR = 125° is obtained.
Now we are supposed to divide this angle into 4 equal parts, thus each of the divided angle should be measured.
So with respect to the line PQ we measure the angle 31.25° and mark a point, then we join the line segment from Q to this point. Then we do the same procedure for angles measuring 62.5° and 93.75° w.r.t the line PQ and join them.
Thus we end up with 4 equal halves of the angle ∠PQR measuring 31.25° each.
It is shown as follows: