ABC is an equilateral triangle. A circle is drawn with centre A so that it cuts AB and AC at points M and N respectively. Prove that BN= CM.

Verified
Hint: In this question, we will first draw the diagram. After this, we use the concept that the radius of the circle is equal, we will find MB and NC. Now, we will apply the SAS congruence rule in triangle MBC and triangle NBC.

Complete step-by-step answer:
Let us first draw the diagram of the question: 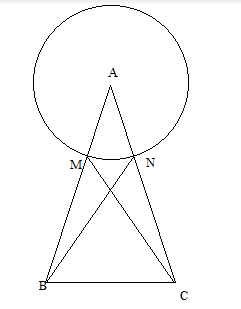