A rod bent at right angle along its centre line, is placed on a rough horizontal fixed cylinder of radius R as shown in the figure. Mass of the rod is 2m and the rod is in equilibrium. Assume that the friction force on rod at A and B is equal in magnitude 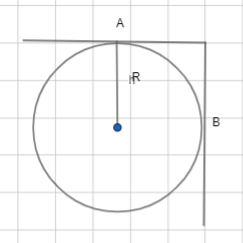 Verified
Hint: Draw a free body diagram according to the question and show all the components of the force. Then equate all the force components and solve the equations to find the forces which are asked in the option and compare the results to see which option is true.

Complete step by step answer:
First we will draw the component of various forces at point A and B. Electric Current and Its Effects