Nouns are the focal building blocks of any language, and they refer to people, things, ideas, objects, spots, etc. In every language, you will come across words that refer to things that are the subject of the sentence and tell us what the sentence is about. A lesson in nouns is typically the first English grammar assignment in the first year of a child's education.

While learning naming words for Class 1, kids need the explanation of the concept in clear and concise language so that the idea of nouns gets ingrained in their young brain to build a strong foundation for English in later years. Every sentence in the English language needs to have a subject and that subject is always a type of noun whether proper or common. Let's learn the noun definition for Class 1 in detail.

In this chapter, we are going to learn about nouns which are also known as naming words. 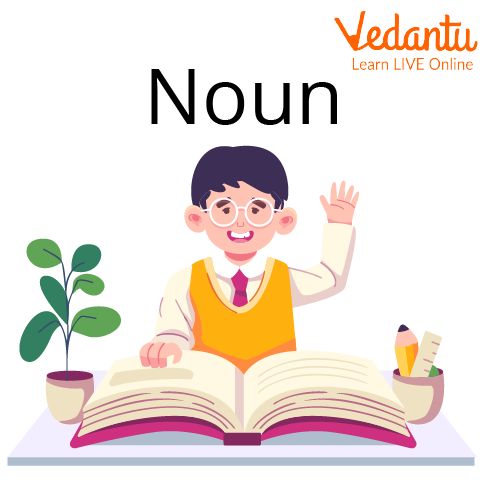 A noun is a word that names a specific entity, such as a place, thing, person, or concept. Nouns can serve as the subject, direct object, indirect object, subject complement, object complement, appositive, and adjective in a sentence. In other words, words which tell us the names of people, places, animals and things are called nouns. 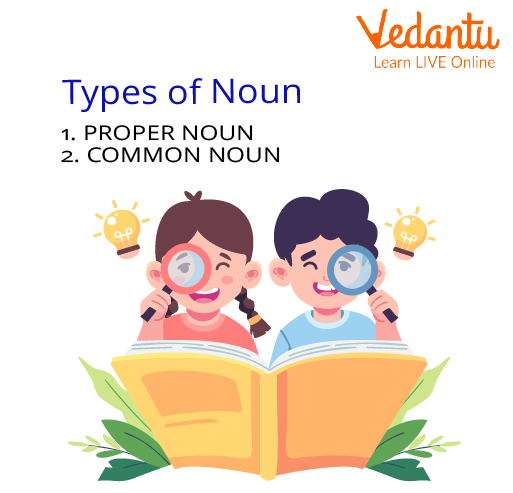 The majority of words in the English language are nouns, and there are many different kinds of nouns.

Common nouns are used to refer to any object, location, person, or idea. Unless they are the first word in a sentence, they are not capitalized. Names of particular individuals, places, things, or concepts are referred to as proper nouns. All proper nouns must be capitalized.

Most nouns are common nouns. Common nouns, such as chair or dog, refer to people, places, and things in general. Examples are teacher, vehicle, music, danger, and receipt. 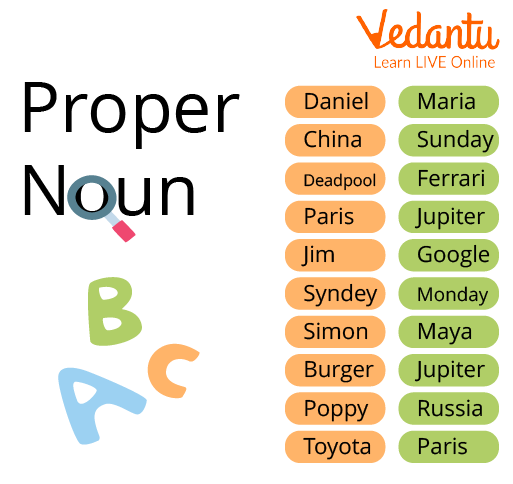 Some More Examples of Nouns:

The article gives an idea about nouns. Noun is a term that names a specific someone, location, object, or notion. Nouns include things like names, places, and things found in the physical world, as well as things and thoughts that are not found there, like a theory. They serve as the foundational blocks of language. Nouns are perhaps the most important of the several components of speech.

Find the common and proper nouns in the following sentences.

Find The Common And Proper Nouns in The Following Sentences.

1. The Taj Mahal is one of the wonders of the world.

2. Ranveer is the most intelligent student in our class.

3. The girls are jealous of Siddhi.

7. There are many cafes in the city.

Benefits of Learning Noun for Class 1

Nouns exist in every form of written and spoken English and are the most important part of the vocabulary.

In the chapter noun of English grammar for Class 1, students will be presented with the following types of activities:

Some Facts about Noun English Grammar

Grab the Free PDF of Noun Examples for Class 1

On Vedantu's website, the subject matter experts have prepared elaborate content on naming words for Class 1 which is designed to suit the learning capabilities of young kids.

Vedantu's subject matter experts have provided the most exciting and easy-to-understand explanation of noun exercises for Class 1 students in the free PDF. Every concept has been discussed in detail and elaborate with suitable examples and practise exercises. Download the PDF for free and study at your own pace to ace the important topic of nouns.

1. What are the different types of nouns?

There are mainly two different kinds of nouns, as explained below:

When you change a verb to form a noun by adding "ing" to the verb, such words are termed gerund. For instance, go -> going, write -> writing, live -> living, etc. Some examples of converting a verb to noun form in a sentence are "I like to read" (verb) -> "I like reading" (noun).

You can teach nouns to your children with pictures, conversation from real life, and exercises like sorting, scavenger hunting, matching common and proper nouns, etc.