Which of the following nucleotide bases is found only in RNA, not in DNA?
A. Guanine
B. Adenine
C. Thymine
D. Uracil

Verified
Hint: Nucleotide bases or nitrogenous bases are the ones that form the ladder of a DNA molecule; they are different in RNA and DNA.

Complete answer: RNA and DNA are both nucleic acids which are a polymer of nucleotides. These nucleotides are made up of nitrogenous bases, sugars, and phosphate. Sugar and phosphate tightened combine to form nucleoside.
There are mainly 2 types of nitrogenous bases known as the purines and the pyrimidine which form the ladder of the structure of RNA or DNA.
Purines are the Adenine and Guanine and pyrimidine is the Thymine and Cytosine. In the case of RNA instead of thymine, uracil is present.
Chemical degradation of cytosine in the case of RNA forms uracil and hence thymine is found in DNA to distinguish, while in the case of RNA because the production and use of uracil are energetically less expensive, uracil is found. 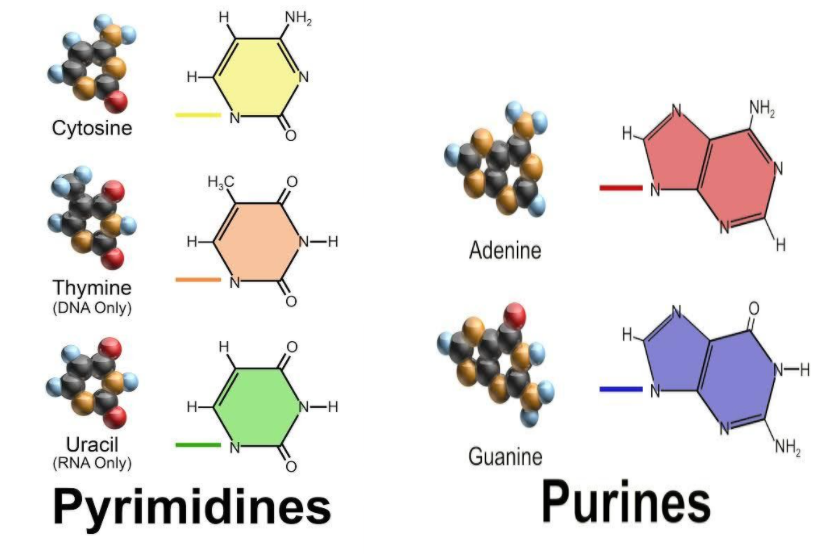 Additional information: Uracil also called U or hybar X, belongs to the class of organic compounds known as pyrimidines.
1. Pyrimidines are compounds that primarily contain a pyrimidine ring, which bears a ketone. Uracil exists as a solid, soluble (in water), and a weakly acidic compound.
2. Uracil has been found throughout all human tissues and has also been detected in most biofluids, such as saliva, blood, feces, and CSF.
3. Uracil exists in all eukaryotes, ranging from class yeast to humans.
4. Uracil participates in a number of enzymatic reactions.

So the correct answer is D. Uracil

Note: It should be noted that these nucleotide bases are categorized as Purines and Pyrimidine and are different in DNA and RNA only on the sole principle of energy conservation.