Three circles of radius $3,4,5$ touch each other externally. Tangents are drawn at the point of contact, which meet at $P$. Find the distance between point of contact and $P.$

Verified
Hint: Here we will be using the property of radical axis i.e. the axis of two circles is the locus of a point which moves such that the lengths of the tangents drawn from it to the two circles are equal and $r = \dfrac{\Delta }{s} = \dfrac{{\sqrt {s(s - a)(s - b)(s - c)} }}{s}$ . Use this to find the distance between point of contact and $P.$ 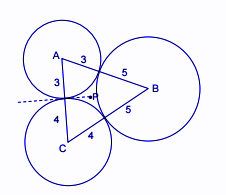