Verified
Hint: Acceleration due to gravity is the acceleration of a body due to the force of gravity acting on it. Consider a point mass at a distance of r from the centre and at a depth of d from the surface. Then use the formula of gravitational force between two bodies is given as $F=G\dfrac{{{M}_{1}}{{M}_{2}}}{{{r}^{2}}}$. Then equate thus this to F=mg and find an expression for g.

Complete step by step answer:
Any two bodies in the universe exert a force of attraction on each other. This force of attraction is called the gravitational force. The two forces are equal in magnitude but opposite in direction. The direction of the force exerted by body1 on body2 is always directed towards body1 and vice versa.
The magnitude of gravitational force depends on the two masses of the given bodies and the distance between the bodies. It is directly proportional to the product of masses (${{M}_{1}}$ and ${{M}_{2}}$) of the two bodies and inversely proportional to the square of the distance (r) between the centres of the bodies.
Therefore, the magnitude of gravitational force is given as $F=G\dfrac{{{M}_{1}}{{M}_{2}}}{{{r}^{2}}}$.
Hence, the bodies on earth are attracted towards it with a force of $F=G\dfrac{mM}{{{r}^{2}}}$ …….(i) where m is the mass of the body, M is the mass of earth and r is the distance of the body from the centre of earth.
According to Newton’s second law of motion F=ma, where m is the mass of the body and a is the acceleration of the body.
When it comes to gravity, the acceleration of the given body is called acceleration due to gravity and is denoted by g. Therefore, the force exerted on a body of mass m is F=mg ……(ii)
Let us now calculate the acceleration due to gravity of a body of mass m, inside earth at a depth of d from earth’s surface.
For this, we have to make certain assumptions. Assume that the given body is point sized. Let the shape of earth be a sphere of radius R and its mass density (mass distribution in the volume) be uniform everywhere.
Draw a figure of a sphere of radius R. Let the body be located at a distance of r from the sphere or depth d from the surface.
Draw an imaginary sphere with the same centre and radius r. 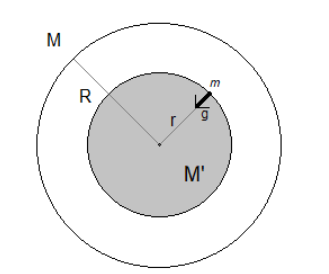 Electric Field Due to Point Charge