Space between cornea and lens is
A. Anterior chamber
B. Vitreous chamber
C. Fovea chamber
D. Canal of Schlemm

Verified
91.5k+ views
Hint: The eye (Organ of sight) helps to examine changes in the environment and sends the signal into the central nervous system. Human beings have a pair of eyes located in eye sockets (or) orbits of the skull. The eyes are directed forward and modified for binocular vision.

Complete answer: As we know, the wall of the human eye is composed of three layers, the external layer called sclera made of a dense connective tissue. The anterior part of the sclera is the cornea, the middle layer (or) choroid is bluish and contains many blood vessels, when it forms the ciliary body, the ciliary body continues to form the iris, is the visible colored portion of the eye. 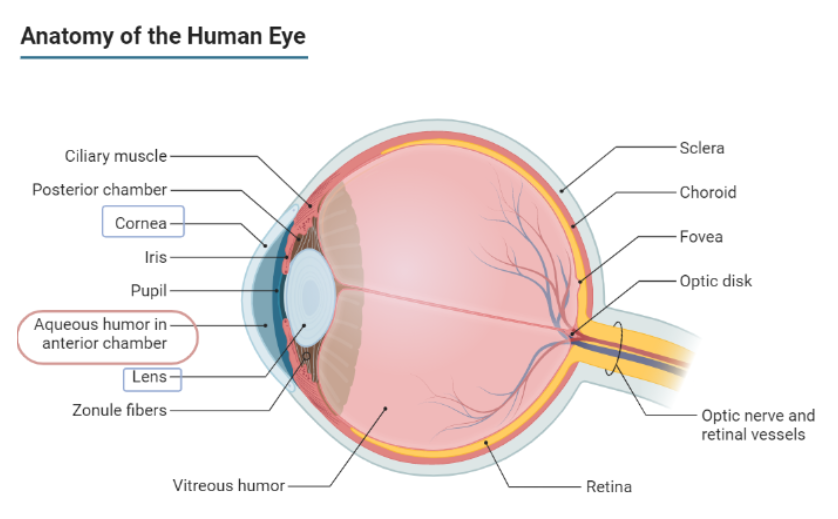 The eyeball contains a transparent crystalline lens held in place by the ligaments of the ciliary body. In front of the lens, the iris envelops an aperture called the pupil. The inner layer is the retina which contains three layers of cells- the innermost layer contains ganglion cells, middle layer - bipolar cells, and the outermost layer is called the photoreceptor cells. The anterior chamber lies between the cornea and lens, is filled with the thin watery fluid in aqueous humour and provides nutrition to the lens and cornea. Hence, from the above discussion, we can say option-A is the right answer.

Note: The vitreous chamber is larger than the aqueous chamber lies between the lens and retina, it is filled with the transparent gel called vitreous humour that gives shape to the eye, supports retina and lens, refracts the light rays and maintains Intraocular pressure inside the eye.