Verified
91.8k+ views
Hint: This hormone is secreted by the gonadotropic cells in the anterior pituitary gland. An acute rise of this hormone triggers ovulation and development of the corpus luteum in females.

Complete answer:
The ovulation process occurs under the influence of LH known as the luteinizing hormone which is secreted by the gonadotropic cells in the anterior pituitary gland. The process of release of a mature egg from the ovary is known as ovulation.

Additional information:
- In humans, ovulation occurs about midway through the menstrual cycle after the follicular phase that means on the 14th day of a 28-day cycle. This takes place under the influence of follicle-stimulating hormone. 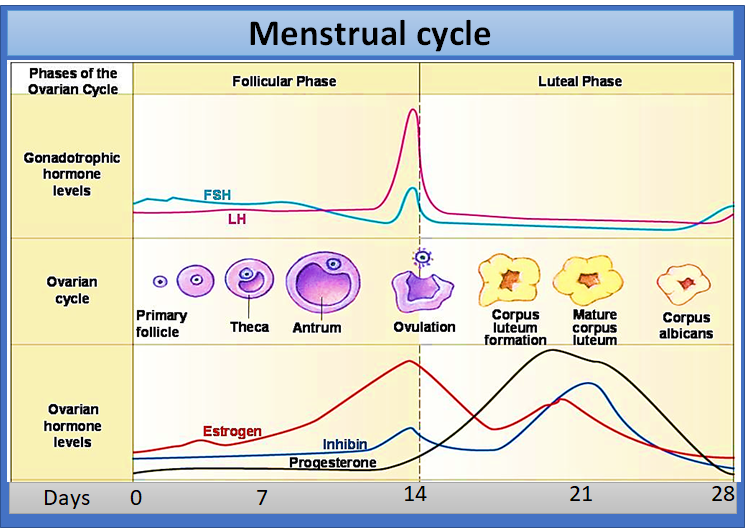 - The luteinizing hormone is released by the pituitary gland into the bloodstream and is one of the gonadotropic hormones.
- The luteinizing hormone is responsible to stimulate the growth of ovarian follicles in the ovary before the release of an egg from one follicle at ovulation, in women.
- This hormone also stimulates a number of follicles to develop and start the production of the estrogen hormone.
- The secretion of luteinizing hormone increases rapidly just before ovulation occurs which is called LH surge under the influence of estrogen.
- During the luteal phase of the menstrual cycle, the corpus luteum develops from an ovarian follicle just after the release of a secondary oocyte from the follicle during ovulation.
- The LH hormone is responsible to stimulate the formation of the corpus luteum and LH is also very much necessary to maintain the luteal function for the second two weeks of the menstrual cycle.
So, the correct answer is, ’(d) LH’.