In a tree ecosystem, the pyramid of number is
(a) Upright
(b) Inverted
(c) Both A and B
(d) None of the above

Verified
Hint: In a tree ecosystem, the tree is the primary producer and occupies the base whereas microparasites occupy the top consumer level. Pyramid of numbers depicts this data according to increasing or decreasing numbers in trophic levels. 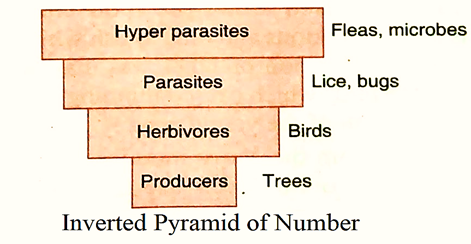 So the correct answer is ‘Inverted’.

Note: -The pyramid of numbers is inverted for a parasitic tree ecosystem.
-The pyramid of numbers for a tree ecosystem can also be spindle-shaped in the case of a non-parasitic ecosystem. Where the base is occupied by the tree as primary producers.
-Small herbivorous birds and animals are the primary consumers and are more in number.
-Top predators like Eagles occupy the top of the pyramid and fewer in number than the herbivores. 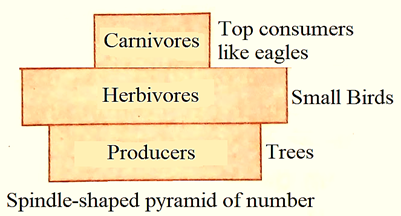 What is a Natural Ecosystem?

Volume of a Pyramid

Productivity in the Ecosystem

Is 1 a Prime Number

Is 2 a Prime Number