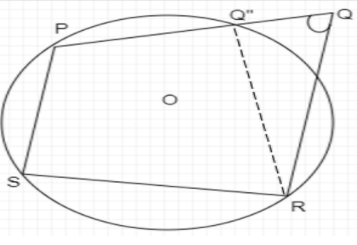 But it is given

We can see from the diagram that

This can be only true if, Q and Q” coincides. Therefore Point Q should lie on the circle.
Hence it is proved that if the sum of the opposite angles of a quadrilateral is \[{180^ \circ }\] , the quadrilateral is cyclic.

Note: Students can get confused with the diagram, and they might assume the angle Q” as right angle but keep in mind unless you are given from the diagram or separately, don’t assume any angle on your own.