Verified
Hint: Think about the influencing forces for a body in a state of free fall. In other words, the only accelerative contribution is that of gravity. And the acceleration due to gravity when not subjected to any external forces remains the same throughout. So, in free fall, if the body is gaining velocity at a constant rate then think of what happens to the acceleration.

(I)The rate of change of velocity remains the same.
(II)All freely falling bodies on Earth accelerate at a rate of $9.8ms^{-2}$ downwards.

This means that a freely falling body undergoes a uniformly accelerated motion, which has the implication that acceleration remains constant throughout. This means that with time, the velocity increases at a constant rate.
If we were to look at the velocity-time graph, it would look something like: 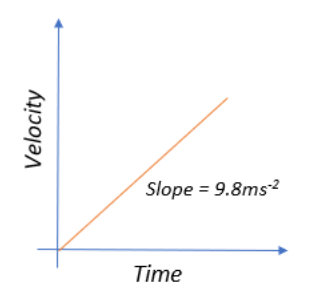 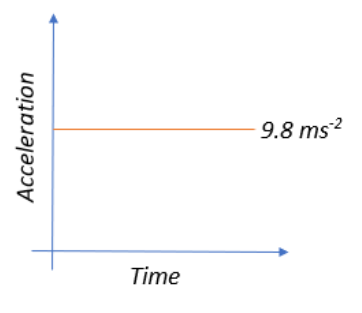 Thus, from the above acceleration-time graph for a freely falling body we can conclude that the right option would be, A straight line parallel to the time axis.

Note:
Remember that the acceleration remains constant for a freely falling body because it falls under the influence of only gravity. The velocity changes with time but at a constant rate throughout.