Interesting Facts About Octopus and Its Features

The octopus is a marine animal that has 8 arms. This information is scary enough for us. Movies and serials have depicted them as huge monsters. Actually, they are sentient beings that live in the depths of seas and oceans and survive. They have remarkable bodily features that make them quite unique in the animal kingdom.

In this article, we will discuss a list of facts and information about octopus and find out their significance. We will learn how an octopus is different from other people. Let’s dive in and find out.

What is an Octopus?

Octopuses are invertebrates belonging to the Class Cephalopoda. It has eight limbs and it falls in the order Octopoda in this class. They have soft bodies and bulb-shaped heads with eight limbs coming resembling high-functioning tentacles. If you see the diagram of octopus, you will realise how the limbs are located underneath the bulbous head.

There are 300 recognised species of octopuses found in the depths of marine ecosystems. We don’t find them in freshwater ecosystems generally. However, a handful of the species can be found in the freshwater rivers of North America. 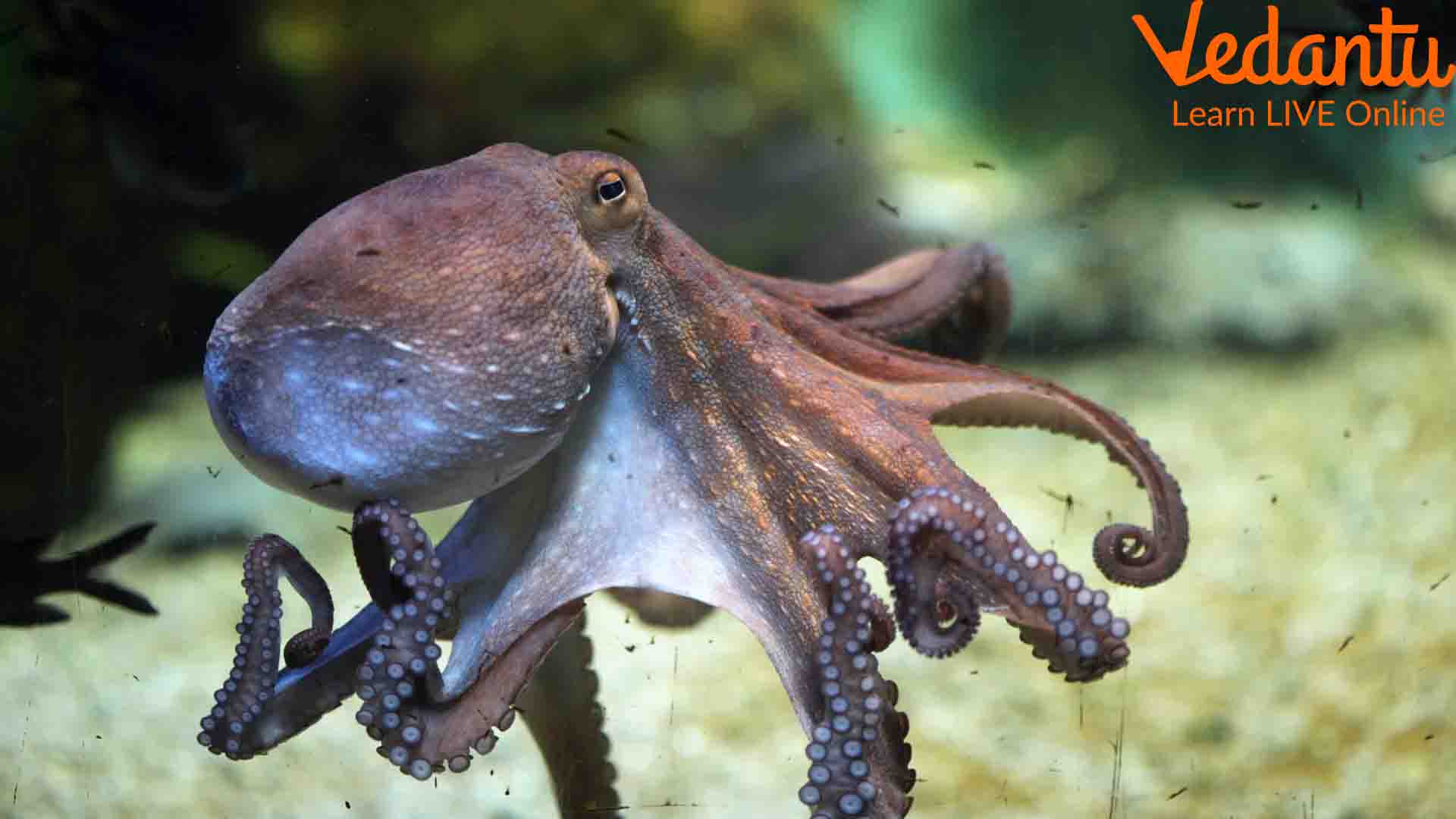 Also Read: How Do Fish Sleep with Their Eyes Open?

All octopuses are venomous in nature. They do not produce venom but symbiotic bacteria in their mouths do the work. The most venomous is the blue-ringed octopus.

Yes! You read it right. An octopus has 9 brains and it is really an intelligent creature. The central brain is doughnut-shaped. It forms a ring shape around its food canal. It means that an octopus swallows its food through its central brain.

Now, where are the rest of the brains located? Each arm wields a mini-brain. It means that each arm has a brain of its own to think and respond. Imagine the arms of an octopus exploring the sea surface, crevices, and rocks and collecting information individually!

This decentralised or distributed central nervous system delivers an exceptional sense of touch. Each brain controls the movement of each arm and the central one controls the prime physiological functions. Each arm has 40 million neurons connected to the sucker in each arm.

Now you know how many brains an octopus has and how they are used!

3. No Coordination With the Location of Objects

Now that we know an octopus has how many brains, you will be surprised to know that the mini-brains only send stimuli of touch and taste. These brains have nothing to do with arm-eye coordination and orientation. It means that an octopus senses and tastes something lurking in crevices but cannot locate it until it sees it.

This is actually not the case for humans. We can even locate things even when we are unable to see them but feel them with our hands. This feature is called proprioception. Octopuses do not have this feature. This is how the octopus brain works.

4. The Colour of Blood

An octopus has blue blood. It is because the pigment of its blood is haemocyanin. It is a complex protein that enables the exchange of gases. It does not contain iron as we do in our haemoglobin. It contains copper that causes the blue colour of blood. Hence, the octopus blood colour is blue.

An octopus has three hearts. It is an evolutionary feature that enables an octopus to manage the limited oxygen availability underneath the sea. This remarkable feature of the circulatory system of an octopus provides two hearts to each gill and a central heart to pump oxygenated blood to the organs and tissues.

6. Octopus Can Squeeze Into Anything

As they do not have an internal or external skeletal system, they can squeeze in any small crevice or a hollow object. This makes a unique animal master the art of escaping. It also helps them to squeeze in and find food from the deepest corners of the sea surface.

Forget the snipers in the Ghillie suits who can trespass an enemy territory and still return alive. The octopuses are one of the best camouflage artists in the marine world. They carry their suits in their skin. It takes hours for a sniper to prepare his suit but an octopus can do it in milliseconds.

The texture and pigments on their skin cells can change very quickly and can imitate the surrounding in no time. Whether it is a smooth seaweed or a rocky surface, they can adjust their skin textures accordingly and become invisible to plain sight. They are great mimickers of nature.

They spray an ink-like liquid to create a smokescreen for escaping from predators. This ink makes predators blind for a temporary period and offers ample time to escape.

The Fact That Octopuses are Smart

Don’t think that this blue-blood animal is stupid. It can learn faster and can even imitate other octopuses. An octopus named Otto in the Sea Star Aquarium in Germany learned to squirt water to put off the lights so that it can sleep peacefully.

An octopus can use tools and even make fake shells with objects to protect themselves. It is not shown by all the species but some of them do. They can solve mazes for rewards. Researchers are carefully watching how this animal outsmarts almost all other marine animals in intelligence and we all are surprised.