Refraction Through Prism - Principle and Working for JEE

What is the Refraction of Light?

Usually prisms can be made from transparent materials like glass, plastic, and fluorite. Generally, flint glass or crown glass can be used to make prisms. 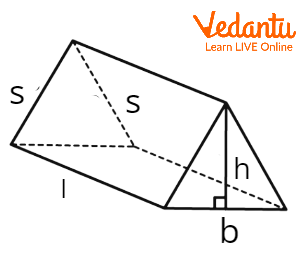 Here, we have shown one example of a glass prism which is triangular in shape. Glass prisms are available in many shapes like rectangular glass prism, polygonal prisms. Here, we will see how these kinds of glass prisms play an important role to understand the phenomena of refraction and dispersion of light.

In this article, we will have a deep insight into the concept of refraction of light, dispersion of light, and their uses in real life.

Refraction of Light Through a Prism

In the prism diagram given below, an incident ray PQ is incident on the first surface AB of a glass prism from air to glass medium. Here, light is travelling from a rarer medium to a denser medium. So, according to Snell’s law, the light ray on refraction bends towards the normal. Now, a light ray enters from glass to air medium at the other surface AC. Here, glass is denser than air, and thus while moving from glass to air, the emergent ray RS bends away from the normal. Refraction of Light through a Glass Prism

What is the Dispersion of Light?

Light rays of different colours travel with the same speed in vacuum, but they travel with different speeds in different mediums. Red light has the maximum and violet has the minimum wavelength. Wavelength of light is directly proportional to velocity. So, red light travels fastest, while violet light travels slowest in any medium.

Dispersion of Light by a Glass Prism

Dispersion of white light takes place because while passing through the transparent medium, the angle of refraction of lights of different colours is different. When white light incidents on the glass prism, it will experience refraction of light. Red colour has a maximum wavelength. So, it will deviate least and create the upper part of the spectrum. Violet has the least wavelength, so it deviates the most. 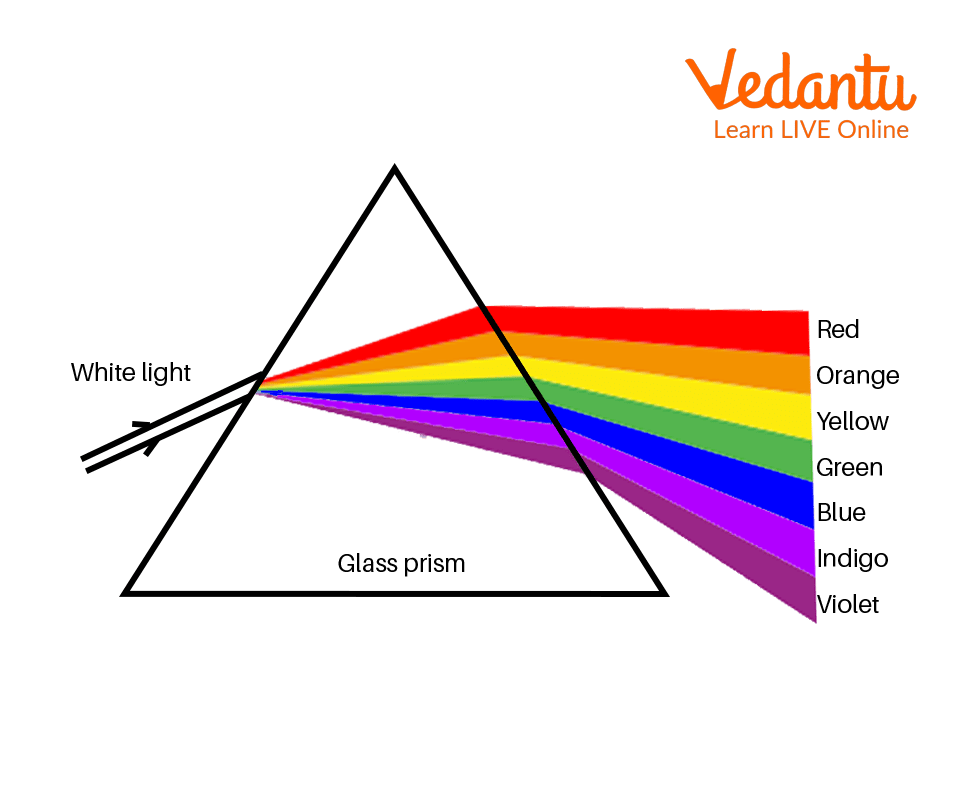 Dispersion of Light by a Glass Prism

A rainbow is generally formed when the Sun appears just after it has rained. At this time, many water droplets will be present in the air. When the sunlight incidents on these water droplets, dispersion of light takes place while undergoing refraction because these tiny water droplets act like small prisms. In this way, a beautiful rainbow is formed. Places where you can always see a natural rainbow are Niagara falls, Victoria falls, and The Canadian Rockies.

In simple words, we can conclude that a glass prism is a solid, homogeneous, transparent, and refracting medium which is bounded by two plane surfaces inclined at an angle. A ray of white light gets dispersed when it passes through a glass prism.

FAQs on Refraction Through Prism - Principle and Working for JEE

1. What will be the outcomes if there is no dispersion?

2. What is the basic reason for the process dispersion?

3. What is the weightage of this section in the JEE examination?

This section carries moderate weightage in the competitive exam of JEE. This section comes in the category of optics which has several frequently asked questions in the JEE competitive examination. The interrelated topic which is similar to the dispersion of light through a glass prism is reflection of light, refraction of light, ray diagrams, lens formula, mirror formula, etc. This section has a weightage of 4-5% which can expect the number of questions to be 5-6. Hence, it is a very important section for the preparation of JEE.

4. Why does the VIOLET light bend more than the RED light?

The main reason behind the twinkling of stars is atmospheric refraction. The density of air is highest at the surface, while it goes on decreasing towards the top layer. When the light coming from a star enters the earth’s atmosphere layer by layer, it experiences atmospheric refraction on account of varying optical densities of air at different points. The continuously changing atmosphere refracts the light from which the star appears to twinkle.

Planets are closer to earth and they are considered as a large number of point sized sources of light. The total amount of light entering our eye remains unchanged. Therefore, planets do not twinkle.

6. Explain in detail the uses of a glass prism.

Glass prisms are mostly used in optical instruments like microscopes and telescopes. Apart from that, we use glass prisms in spectroscopes, laser diodes and lenses, periscopes, binoculars, and cameras. Scientists also use them in their research to understand how the human eye reacts to light. Prisms are used in the architecture field also. To calculate the distance between the Moon and Earth on a roundtrip basis, astronauts use these types of prisms. Ophthalmologists use prism-refracted light to check various parts of our eyes. These are the several fields where we can see the use of glass prisms.