Electrophilic activation of an alkene by mercuric acetate, followed by water addition and reductive demercuration. It involves hydrating alkenes with mercuric acetate in a tetrahydrofuran/water mixture to form an organomercury adduct. The mechanism of oxymercuration - demercuration is based on Markovnikov's Regioselectivity, with the OH group attached to the most substituted carbon and the H group attached to the least substituted carbon.

When alkenes react with mercuric acetate (CH3COO)2Hg or Hg(OAc)2, an oxymercuration product is formed, which is then reduced with NaBH4 in a basic medium to yield alcohols. The first step is the addition of OH and Hg to the double bond of alkenes, known as oxymercuration, and the second is the removal of Hg from carbene, known as Demercuration. Thus,

This two-step procedure is known as oxymercuration-demercuration or oxymercuration-reduction. Because carbocations are not intermediates, the final product is alcohols, which correspond to Markovnikov's addition of water to alkenes without any rearrangement.

The reaction mechanism is similar to that of electrophilic addition reactions.

The following are the examples of Oxymercuration–Demercuration reaction:- 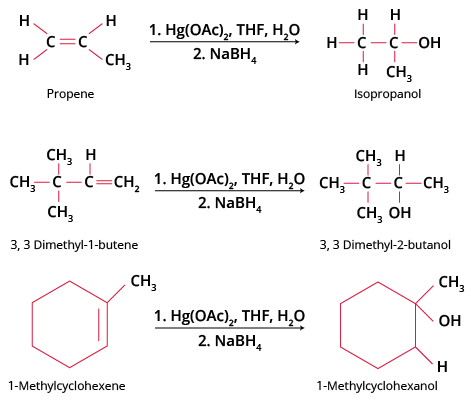 As with alkenes, hydration (adding water) of alkynes requires a strong acid, usually sulfuric acid, and is aided by the mercuric ion (Hg2+). However, hydration of alkynes yields ketone products, whereas hydration of alkenes yields alcohol products. The addition of oxygen in both reactions follows the Markovnikov rule.

During the hydration of an alkyne, the initial product is an enol intermediate (a compound with a hydroxyl substituent attached to a double bond), which immediately rearranges to the more stable ketone via a process known as enol-keto tautomerization.

Hydroboration-Oxidation is a two-step process for producing alcohol. In the alkene double bond, the hydrogen (from BH3 or BHR4) attaches to the more substituted carbon and the boron attaches to the least substituted carbon in an Anti-Markovnikov reaction. Furthermore, the borane acts as a LewisAnti-Markovnikov acid by accepting two electrons from an electron-rich alkene in its empty p orbital. This process gives boron an electron octet. This process is unique in that it does not require the use of a catalyst to be activated. The Anti-Markovnikov Hydroboration mechanism combines hydrogenation and electrophilic addition, and it is a stereospecific (syn addition), meaning that the hydroboration occurs on the same face of the double bond, resulting in cis stereochemistry. 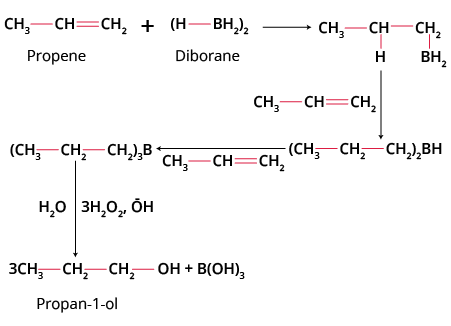 A resonance hybrid of a carbocation and a bridged mercurinium ion is the bridged-mercurinium-ion intermediate. The partial positive charge is shared by the more substituted carbon atom and the mercury atom, reducing the possibility of a carbocation rearrangement. The carbon–mercury bond to the more substituted carbon is also longer and more easily broken.

The above-mentioned factors cause water to attack only the more substituted carbon, opening the three-membered ring.

Finally, the oxymercuration adduct is demercuration with sodium borohydride to yield alcohol with Markovnikov's orientation.

As hydrogen can replace the mercury species in either a syn or anti-fashion concerning the hydroxyl group during the demercuration step, the overall reaction produces a racemic mixture of two enantiomeric alcohols.

Oxymercuration is a textbook Markovnikov reaction; barring extreme cases, the water nucleophile will always attack the more substituted carbon, depositing the resulting hydroxyl group there. Examining the three resonance structures of the mercurinium ion formed at the end of step one explains this phenomenon.

As previously discussed, one of the major reactions in the conversion of alkenes to alcohol is oxymercuration–demercuration. The hydration of alkenes with mercuric acetate in a mixture of tetrahydrofuran and water results in the formation of an organomercury adduct. The reaction mechanism is similar to that of electrophilic addition reactions.

Alkoxymercuration-demercuration is a reaction that occurs when an alkene (a molecule with a carbon-carbon double bond) reacts with an alcohol in the presence of mercuric acetate to form an alkoxy mercury intermediate, which is then reduced with sodium borohydride to form an ether . In other words, we can say that Electrophilic activation of an alkene by mercuric acetate, followed by water addition and reductive demercuration. It involves hydrating alkenes with mercuric acetate in a tetrahydrofuran/water mixture to form an organomercury adduct.