Energy in SHM and Its Frequency of Variation for JEE

An Introduction to Energy in SHM

The bungee cord, when released, allows the person to move to and fro or up and down which is a good example of SHM.

Even with a single push, a cradle can move to and fro for hours which entails SHM.

The to and fro motion of the pendulum of a clock is a perfect example of a simple harmonic motion.

The motion is pretty understandable. While pushing the swing, we witness the motion to and fro motion, which is another example of SHM.

Also, the time period for SHM remains constant. Thus, we assume it to be T. A is the amplitude or the distance of the object from the mean to the extreme position. The position of this object at an instant of time is denoted as $x(t)=A \cos (\omega t+\theta)$ where $\theta$ is the phase shift and $\omega=\dfrac{2 \pi}{T}$ is the angular frequency.

Substituting the value of \[v\] in the above equation, we get,

Now, when the object is displaced from its equilibrium position to their mean position, the work done by their restoring force equals:

Thus, the work done by the restoring force equals the potential energy.

Substituting the K.E and P.E values derived above, we get,

Both kinetic and potential energy are always positive. 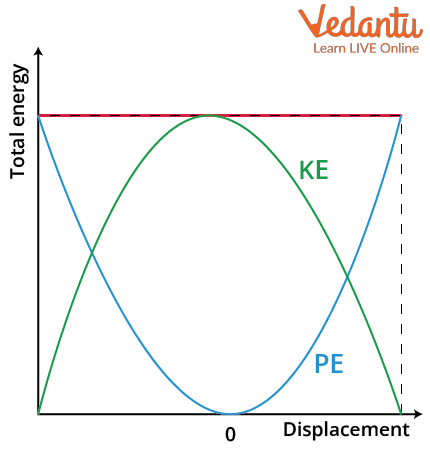 Graph of Total Energy for SHM

Frequency of Variation of Kinetic Energy

Expanding this equation further we get, Pendulum of a Clock

A uniform circular motion can also be called a simple harmonic motion. Tie a ball at the end of the string and try to make it move in a horizontal plane with a fixed point. If we view this motion of the ball from the front or sideways, it looks like a to and from motion. As it has motion, it will also have energies associated with it. The energy of a simple harmonic motion is the sum total of potential and kinetic energy. The total energy is the sum total of the two energies which has been derived above.

1. Can a motion be oscillatory but not simple harmonic? Explain using an example.

2. What is the zero point energy of the simple harmonic oscillator?

A harmonic oscillator is a system that has a restoring force equal to the displacement when the system displaces from the equilibrium position. This restoring force can be denoted as F=-kx, where k is a constant that is always positive.