What is an Electrophilic Addition Reaction?

A sigma bond with a pi bond makes up a double bond. The carbon-carbon pi bond is very reactive and relatively weak. The bond is created by parallel overlapping. Functional groups can be added to carbon, and it is easily broken. The pi electrons also increase the electron density of the carbon atom, which attracts an electrophile. Thus, molecules having double or triple bonds can undergo electrophilic addition reactions. For example,

The formation of an electrophile X+, which forms a covalent bond with an electron-rich, unsaturated C=C bond, is the driving force for this reaction. When the C-X bond is created, the positive charge on X is transferred to the carbon-carbon bond, creating a carbocation.

Attack of Electrophile on Alkene 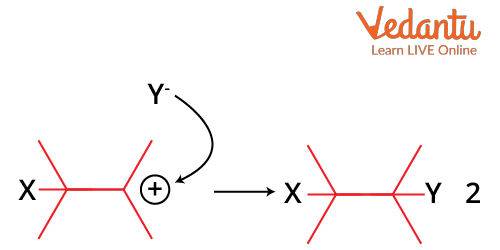 Attack of Nucleophile on Carbocation Formed

Alkenes are a class of unsaturated hydrocarbons having at least one double bond and one single bond. Due to the pi electron density present, they exhibit addition reactions in which an electrophile attacks the carbon-carbon double bond to create the additional products. This process is referred to as an alkene electrophilic addition reaction. These addition reactions sometimes also use a free radical mechanism. Alkene undergoes various types of reactions, including oxidation and ozonolysis.

In the case of alkenes, electrophilic addition reactions can be seen in:

A reduction reaction known as hydrogenation adds hydrogen to the alkenes (usually as H2). An organic substance is "saturated" with extra hydrogen atoms when it is hydrogenated. Since hydrogenation only happens spontaneously at very high temperatures, the procedure normally requires the presence of a catalyst. Nickel, platinum, or palladium are the most often used catalysts. A molecule undergoes hydrogenation when two hydrogen atoms are added to it, frequently to an alkene.

When a halogen molecule, such as Br2, approaches an alkene's double bond, the double bond's electrons push away the bromine molecule's electrons, polarising the halogen-halogen connection. As a result, the halogen-halogen bond acquires a dipole moment. One of the halogens gains a positive charge and responds as an electrophile as a result of heterolytic bond cleavage. The electrophile gets attached to the alkene. Halogenation and electrophilic addition are both involved in this kind of reaction. A bromonium ion forms as a result. Furthermore, the other halogen attacks the intermediate that is formed and the halogen then attaches to the alkene.

Addition of Bromine to Alkenes

Breaking a carbon to carbon double bond is followed by the electrophilic addition of a hydrogen atom and halogen in the hydrohalogenation of alkenes. According to Markovnikov's rule, the halide will add to the more substituted carbon. A haloalkane, commonly known as an alkyl halide, is the end product of the reaction.

The hydrogen from HBr and a carbon from the double bond, the two pi electrons form a C-H sigma bond. A carbocation intermediate is formed which further forms the final product after the addition of a halide ion. Since electrophile is added in the process, this reaction is an example of an electrophilic addition reaction of alkenes.

Addition of H-Br to Alkenes

Alkenes are changed into neutral alcohols by the organic chemical process of hydroboration oxidation. A two-step procedure including hydroboration and oxidation is used to achieve this. This is accomplished via a net addition of water (across the entire double bond).

A hydroxyl group connects to a less substituted carbon during the hydroboration oxidation process, which is viewed as an anti-Markovnikov reaction. According to the anti-Markovnikov Rule, in addition reactions of alkenes or alkynes, the carbon atom with the less hydrogen atoms linked to it receives the proton. The anti-Markovnikov rule is also known as the Peroxide Effect or Kharasch Effect. This effect is opposite to the Markovnikov rule.

Since hydroboration has characteristics of both hydrogenation and electrophilic addition reactions, it is stereospecific and results in cis stereochemistry. Using the hydroboration process, alkenes are transformed into neutral alcohols while alkynes are converted into aldehydes.

Alkene is treated with mercury(II) acetate, Hg(OAc)2, and the product is treated with sodium borohydride, which is known as oxymercuration–demercuration reaction. As a result, a Markovnikov addition product is formed, in which the -OH group is attached to the alkene's more substituted carbon atom. The product of oxymercuration–demercuration is the same as that of direct hydration of an alkene.  The competitive reverse reaction, dehydration, does not occur. Hence, the reactions occur with a higher yield than the direct hydration process. In the first step, the nucleophilic double bond attacks the mercury ion, releasing an acetoxy group, hence it is an example of an electrophilic addition reaction on alkene.

1. What is the test for unsaturation of alkenes?

Alkenes are found using bromine-water in the provided solution. The orange solution of bromine is called bromine water. Bromine water can be decoloured by alkenes but not by alkanes. The formation of dibromoethane by bromine water when it is added to ethene, which signifies the existence of a double bond, causes the solution's initial brown-red colour to fade and turn transparent. This reaction is a type of halogenation reaction. When bromine is added to alkenes, it proceeds via an electrophilic addition reaction mechanism.

2. Which is the opposite of the addition reaction?